Drama at the end of Masters and Challengers

Thursday looked like any other day at the Prague Chess Festival. It started as usual, with the opening move, which was made by Grandmaster Ján Plachetka in the game Vidit vs Navara. The winner of the “Game of the Day” prize was awarded to Sam Shankland for his victory against Nils Grandelius in the 7th round of Masters. But soon after the battles began, what was about to come was beyond anyone's imagination. 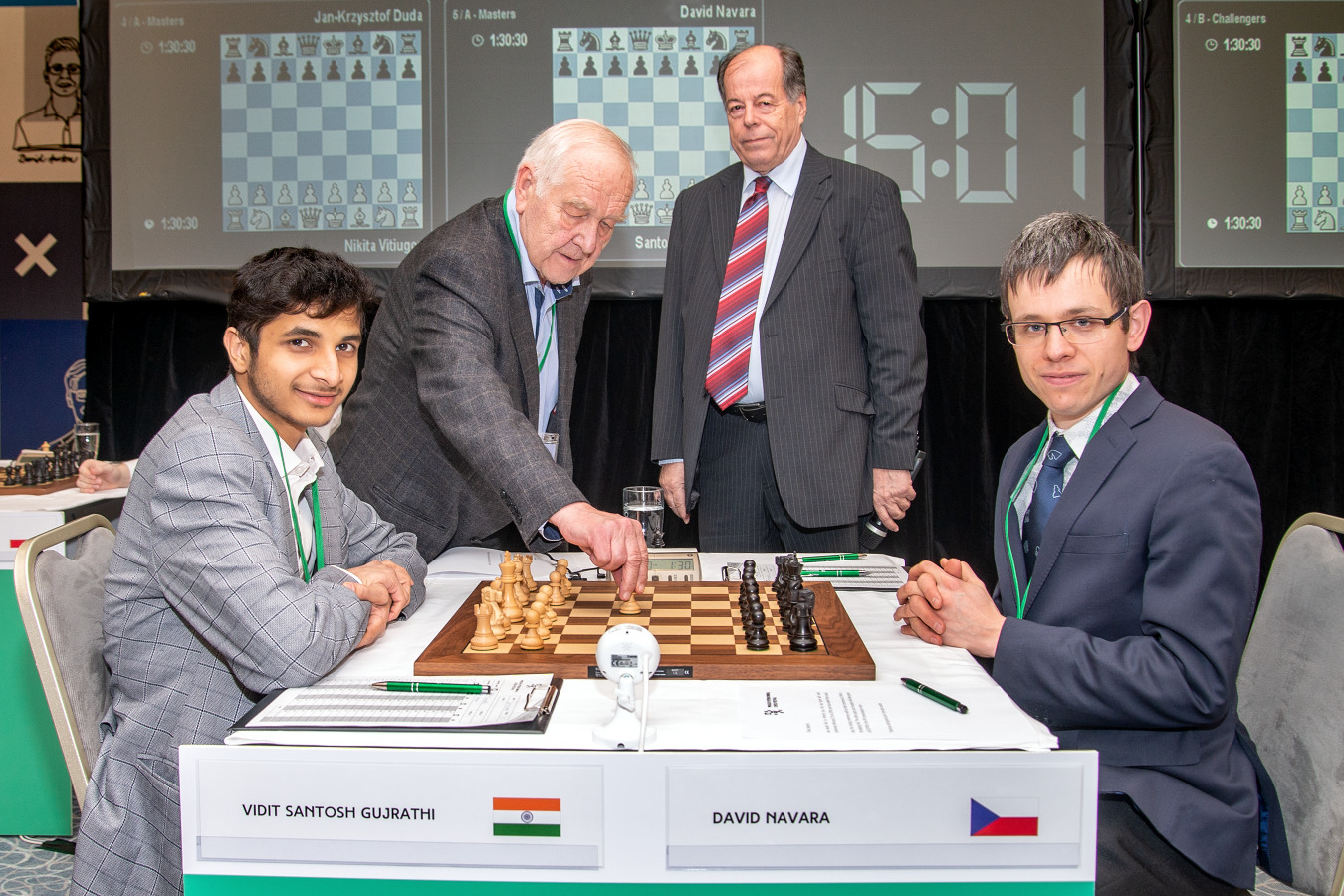 Ján Plachetka did the first move 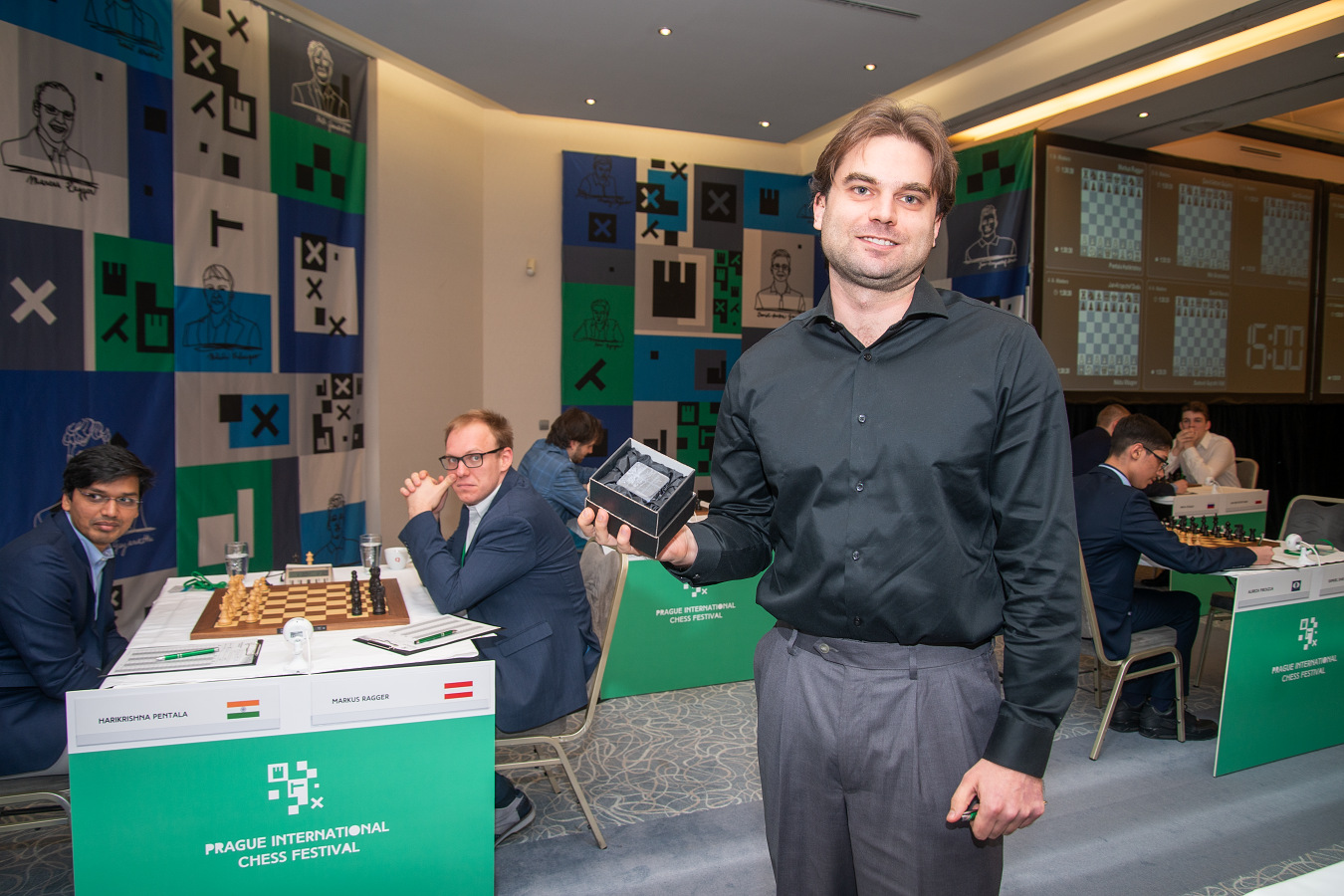 Shortly after the start of the round it seemed we might have a winner with a round to spare, as after the promising opening where he got a significant advantage, Vidit sacrificed a Bishop for an initiative. Soon he gained a clear advantage and it was just a matter of time when he will score. However, Navara fought back and found some ways to make things more difficult for Vidit, as he was in severe time trouble. His advantage slipped and they ended up in an more or less equal endgame, despite Vidit being pawn up. Towards the end of the game, again in time pressure Vidit lost the thread and eventually lost the game.

Navara was of course happy to have won, but as a true gentleman he gave credits to his opponent for his creative play: “ My position was completely lost and I was extremely lucky today. Vidit played great chess until move 32. In the opening I just got outplayed, I underestimated 12.d5 and my counterplay was one tempo too slow. I saw 15.Bxf7 but I believed it wont work as I could manage to hide my king on c7. But after 17.Qe2+ which was a very strong move, 17...Kd6 18.Rd1 Kc7 18.Ne5 and I am losing material. Afterwards, I didn't give up, and also, Vidit was short on time. I offered a Rook exchange which led to a difficult endgame for Black but not without drawing chances. Vidit avoided Rook swap, after which my position was already tenable. Of course, before 55.c5 still nothing happens, he can just wait with Ra1-Ra2. I was very lucky in this game, but it happens sometimes in chess, when you don't give up and try to search for your chances.” 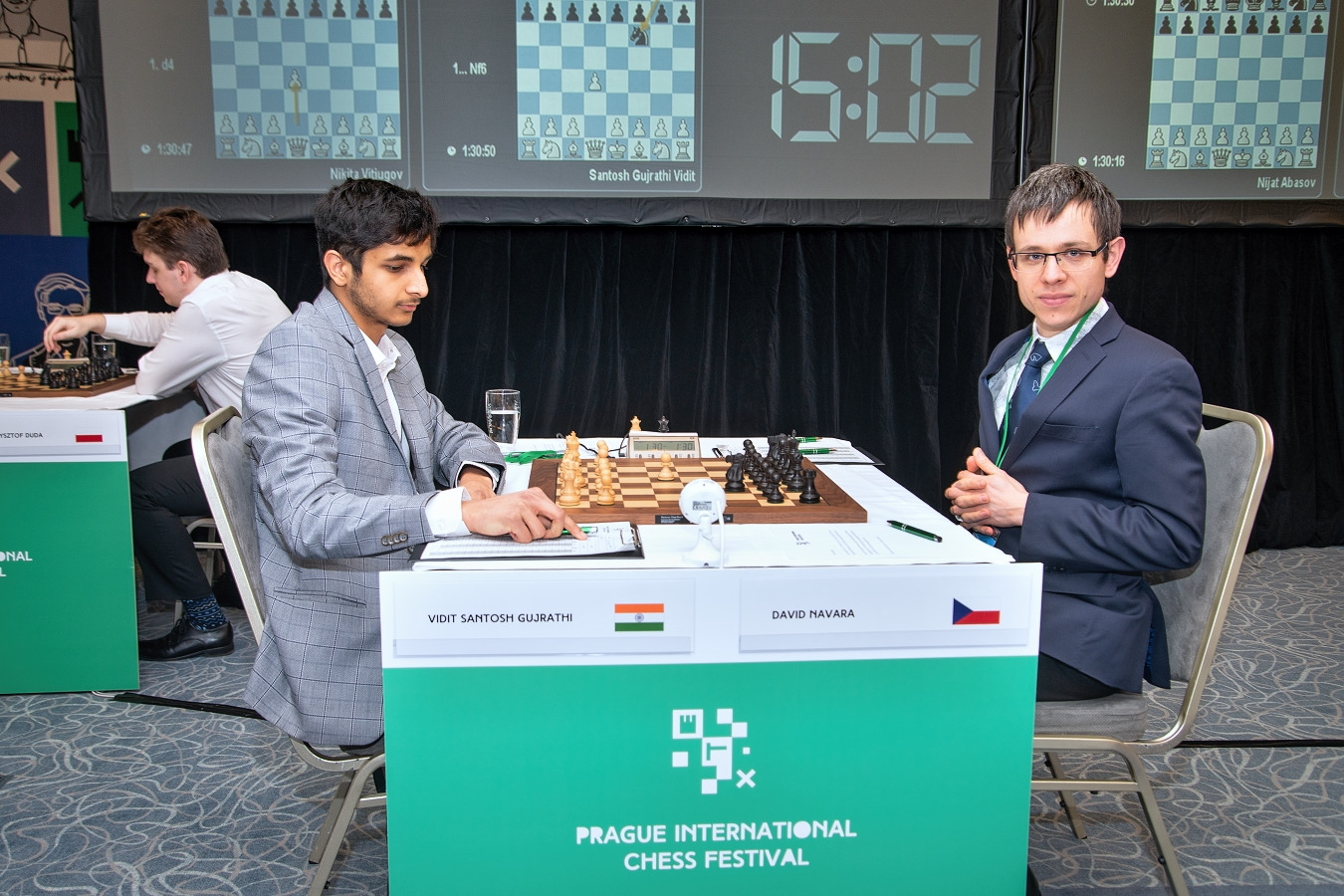 We have seen yet another complex game of David Anton here in Prague. The Spaniard is playing some interesting chess here and his victory over Nils Grandelius in the 8th round only spiced things up entering the final round of the event. “ There was a moment when he could just repeat moves and it would be a draw, but he played for a win. To be honest, I wasn't scared. I thought I had a good position, it was complex, but I was happy with it, and I thought he was the one who had to play precisely and try to equalize. I think he underestimated the position, he felt he had a good attack, but I think my position was solid”, said Anton, who is now half a point behind Vidit, along with Firouzja and Vitiugov.

Vitiugov had a significant advantage against Duda, but the resourceful play of the Polish player made things more difficult for him to convert the game. Eventually, they ended up in a position where we Black had Rook and a pawn against Queen, where Vitiugov failed to find a win.

Harikrishna vs Ragger was a relatively quick draw from Ruy Lopez, while in the game Firouzja vs Shankland, even though it seemed White could progress, with solid defense of the America, draw was soon agreed. “ It was a very interesting game, I thought I had some pressure, but he played well. In the endgame I thought I was much better, with Rook on b6 and pawn on b4, and his pawn on b7, but he managed to find h5 move, which was the key, because then I cannot get my King to g5 square. Then it is just a draw. Overall the game was good”, said Firouzja after the game. 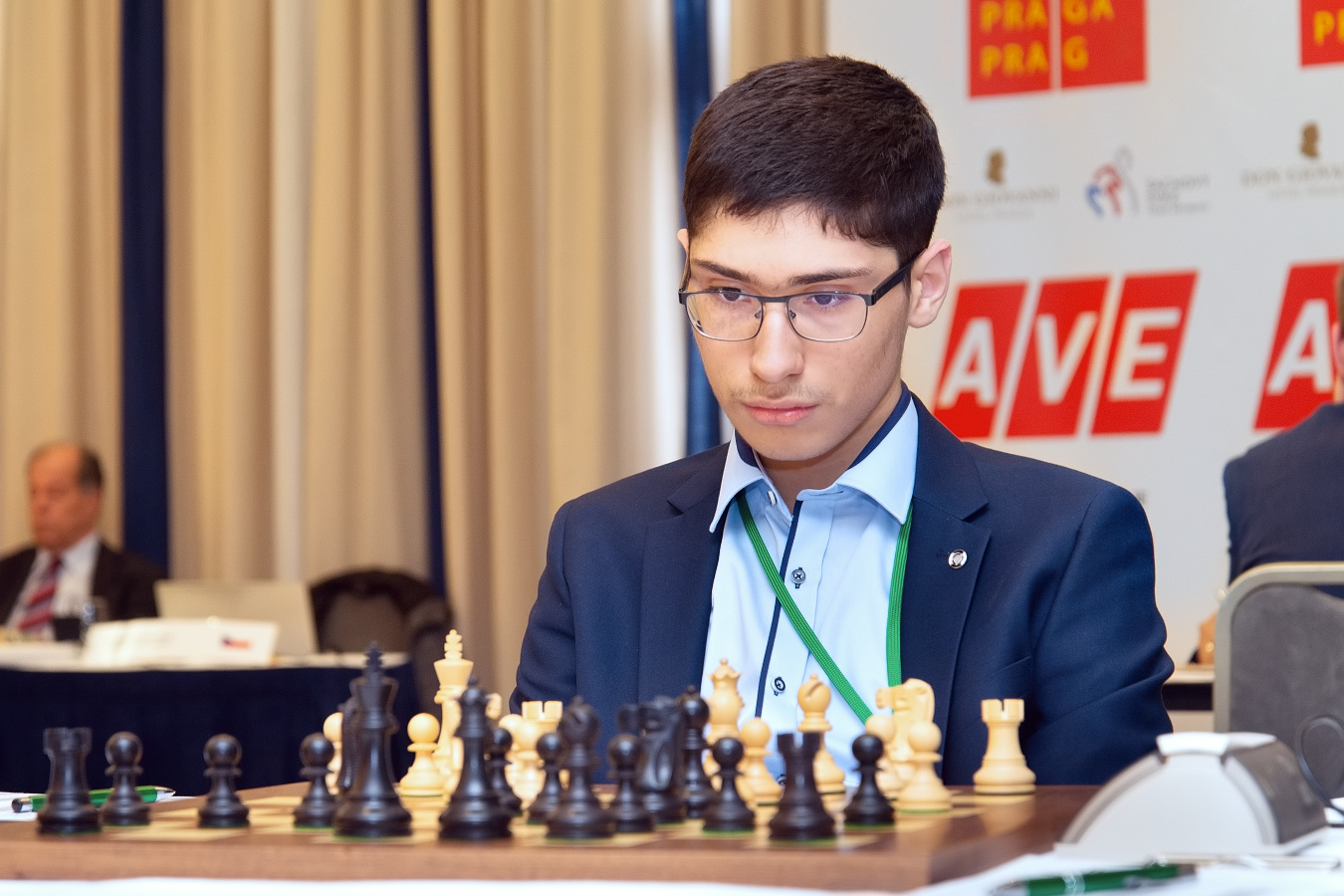 The events from the penultimate round made standing very exciting, as now several scenarios are possible. With the direct duels Duda vs Vidit, Anton vs Firouzja and Shankland vs Vitiugov in the final round, there are seven players who could fight for the Masters title.

No less drama happened in the Challenegrs as well, as the leader of the tournament Hannes Stefansson was defeated by Piorun Kacper, and now there is a four-player tie for the 1st place. It looked as if the game would end in a draw, but a few inaccuracies by the Icelandic Grandmaster and a precise play by Piorun led to his first loss. “ Until he played 35.Rd8+ it was equal i think. He should have played 35.h5 and it should be a draw. He underestimated the position, because it looks like there are not many pawns remaining, but his king is in zugzwang, and it is not easy to equalize. He needs to be really precise”, said Piorun. 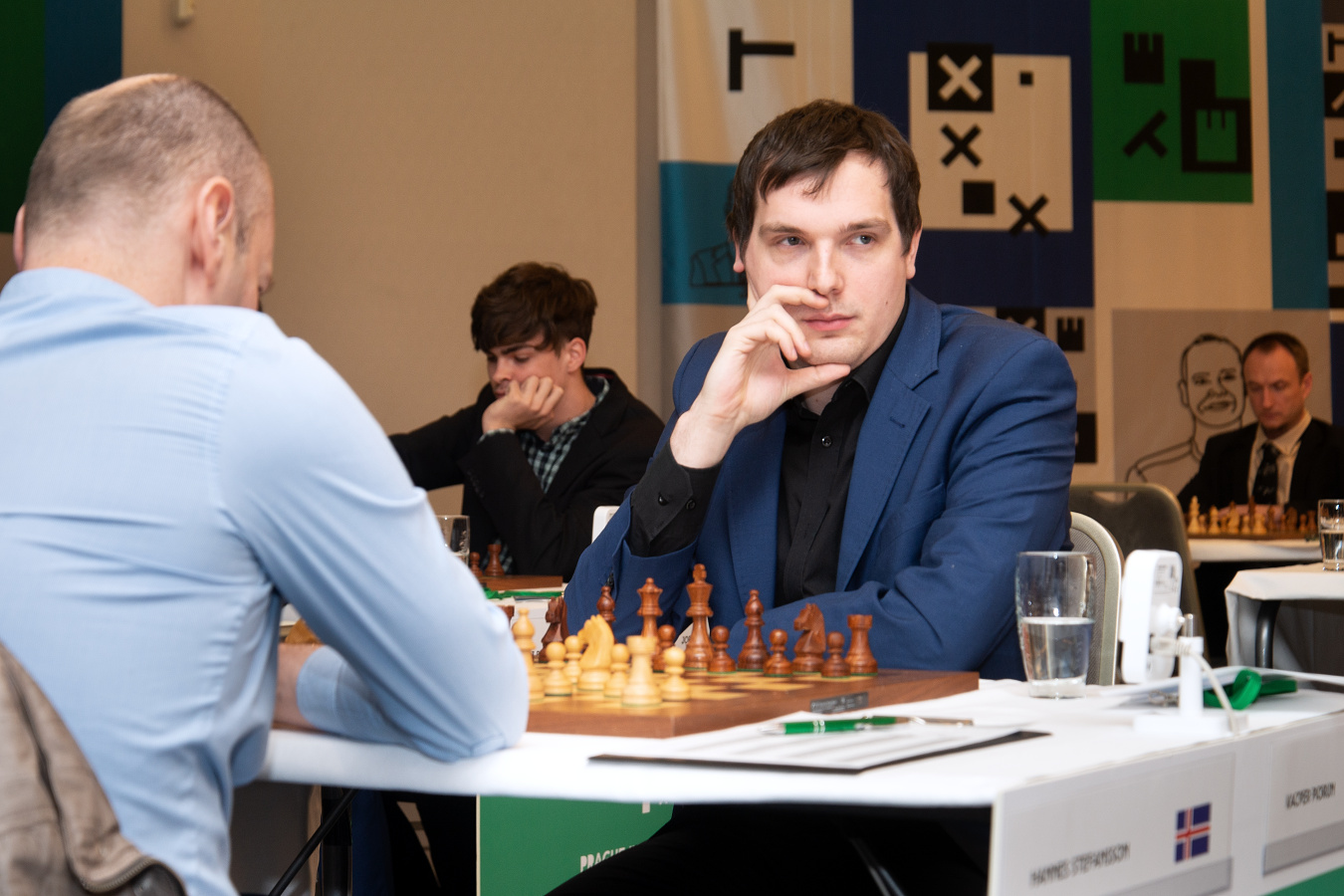 Czech IM Tadeas Kriebel managed to clinch his first victory of the event, by defeating his compatriot Jan Krejci. “ It is really nice to get at least one win in the tournament, but I have to admit it has been one big nightmare for me so far. I think the game was more or less equal, we were following my old game from 2015, this line was even played in Anand vs Topalov match. At some point my opponent blundered terribly, and after that he had a very difficult Rook endgame. Basically, the moment when he played 34.Re1 and allowed me Rf5-Rf2 , this was the critical moment, otherwise it is just a draw I think”, commented Kriebel after the game.

The game between Bartel and Van Foreest was very interesting, but eventually ended in a draw.

“ My game today was one of the toughest from many points of view. First of all, I lost yesterday, which is always undermining your self confidence. Secondly, my opponent was Jorden van Foreest, who is just a very strong player. At the same time, to keep theoretical chances for the first place, I needed to win. The game started quite well for me, as I had more knowledge than my opponent. In a position which looks nice for White, Jorden decided to sharpen the position and sacrificed a pawn. I didn't take it and I was wrong. Black was probably doing fine there, but my opponent blundered 23. Nb2 and it was again White who had more chances. Once again, Jorden looked for a tactical way and sacrificed an exchange. Not for long, as I gave it back, to reach a risk-free and probably more pleasant position. Before the time control my opponent blundered a pawn (34.Bxc6), but his powerful Knight saved him half a point” , said the Polish Grandmaster. 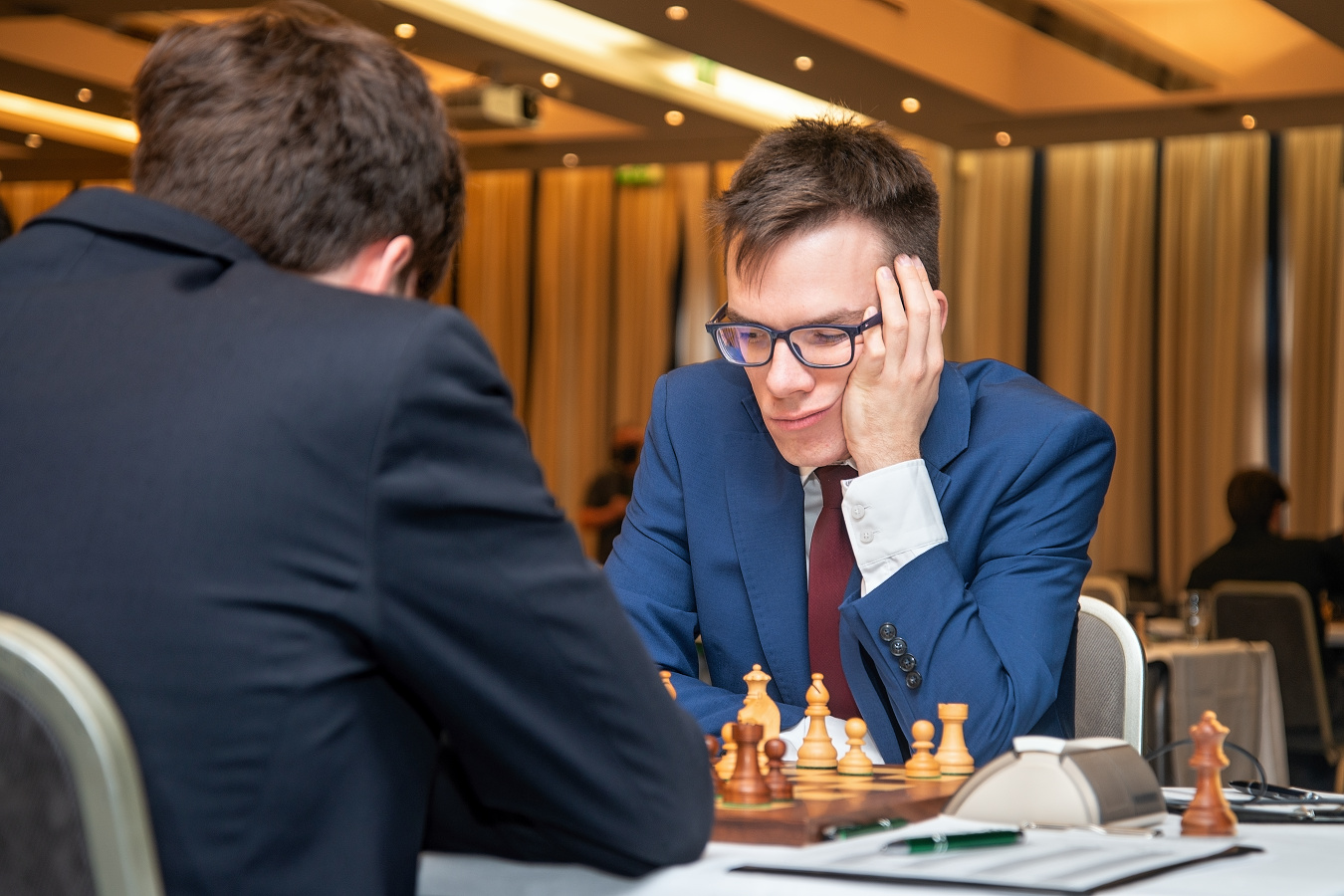 After 8 rounds, Stefansson, Esipenko, Piorun and Van Foreest share the 1st place with 5 points, with the direct encounter Van Foreest vs Stefansson, which can decide the Champion.

Definitely the final round will be full of excitement and we can't wait to see how things will unravel. The jig is up!

IMPORTANT NOTICE: Round 9 of Masters, Challengers, and Futures, and round 8 of Open and Rating tournaments are on schedule on 20th February at 2 pm (CET).

Daily reports and interviews with the players on our YouTube channel.

Photos from the Festival can be found on our Media Page or on Zonerama.