Chess in the movies

The players of the Masters, Challengers, and Futures groups had a free day on Monday. They could, like fans, visit the Aero Cinema Film Festival. Among other films, it featured the documentary “Album 61” about Grandmaster Boris Gelfand, who also played a chess simul against the young chess players. Lubomir Kavalek and Jan Novak then recalled the famous movie director Milos Forman and his relationship to chess. 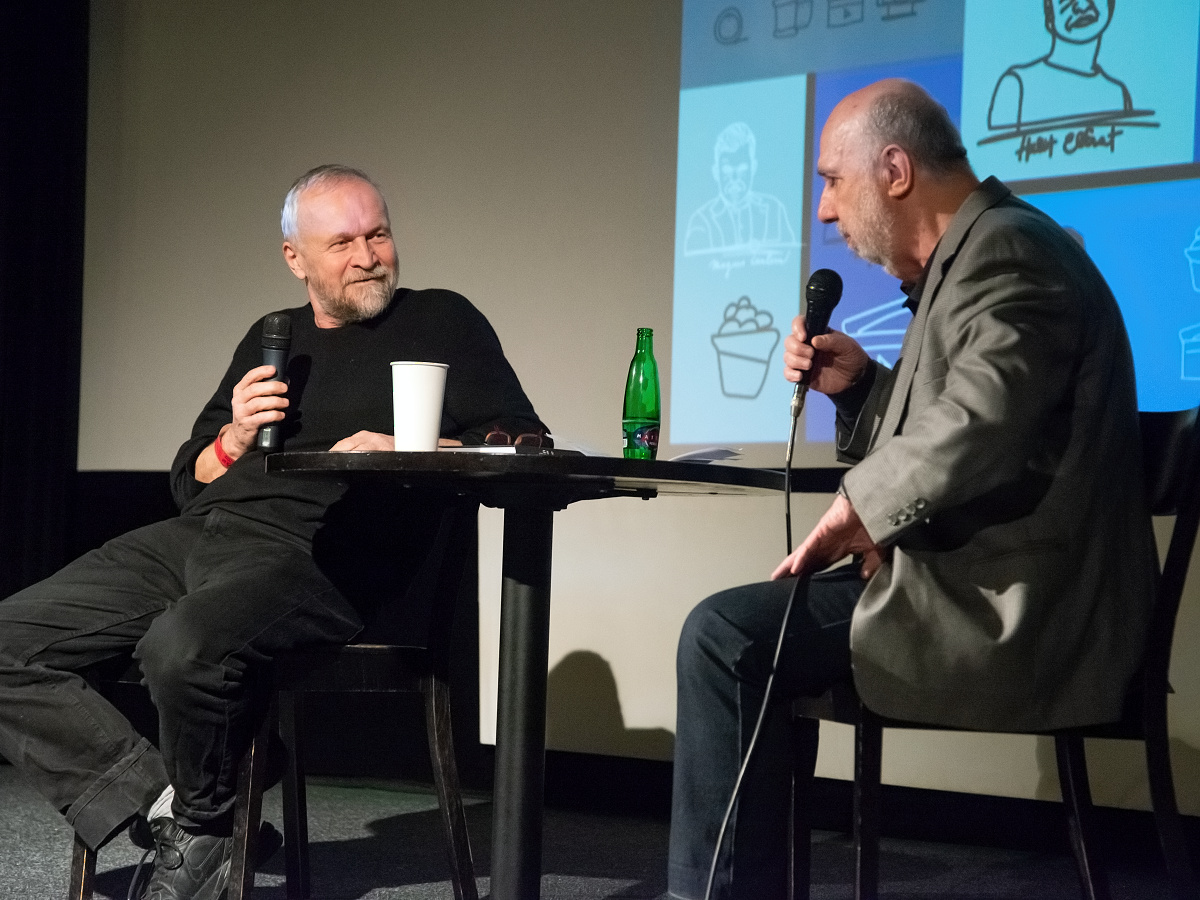 In the morning, a children's day took place in the Hotel Don Giovanni. At 3 pm, chess players from the Futures category played a chess simul with Grandmaster Boris Gelfand in the Aero Cinema. The Israeli player, who fought in 2012 against the Indian Grandmaster Anand for the World Championship title, challenged eleven rivals with a final score of 7.5 - 3.5. It was a great experience for young talents.

“ It's a great feeling to play with such a great chess player. Mostly it's very exciting because he doesn't have much time and can make a big mistake. Unfortunately, I lost, but I was holding very well. I underestimated one of his moves, I should have played more aggressively. Instead, I was passive and that was not good”, said 12-year-old Jáchym Němec after the game. Boris Gelfand then praised the whole Festival in an interview and then returned to his simul. “I played here in Prague last year, it's a great tournament. Moreover, it is well organized, again there is a great atmosphere. Even players get along well. I like to come here and hope that this Festival will become a tradition that will last for many years. It is great for the young chess players to sit next to the experienced players. I hope they will remember the simultaneous with me and that it will teach them something”, commented the Israeli Grandmaster. 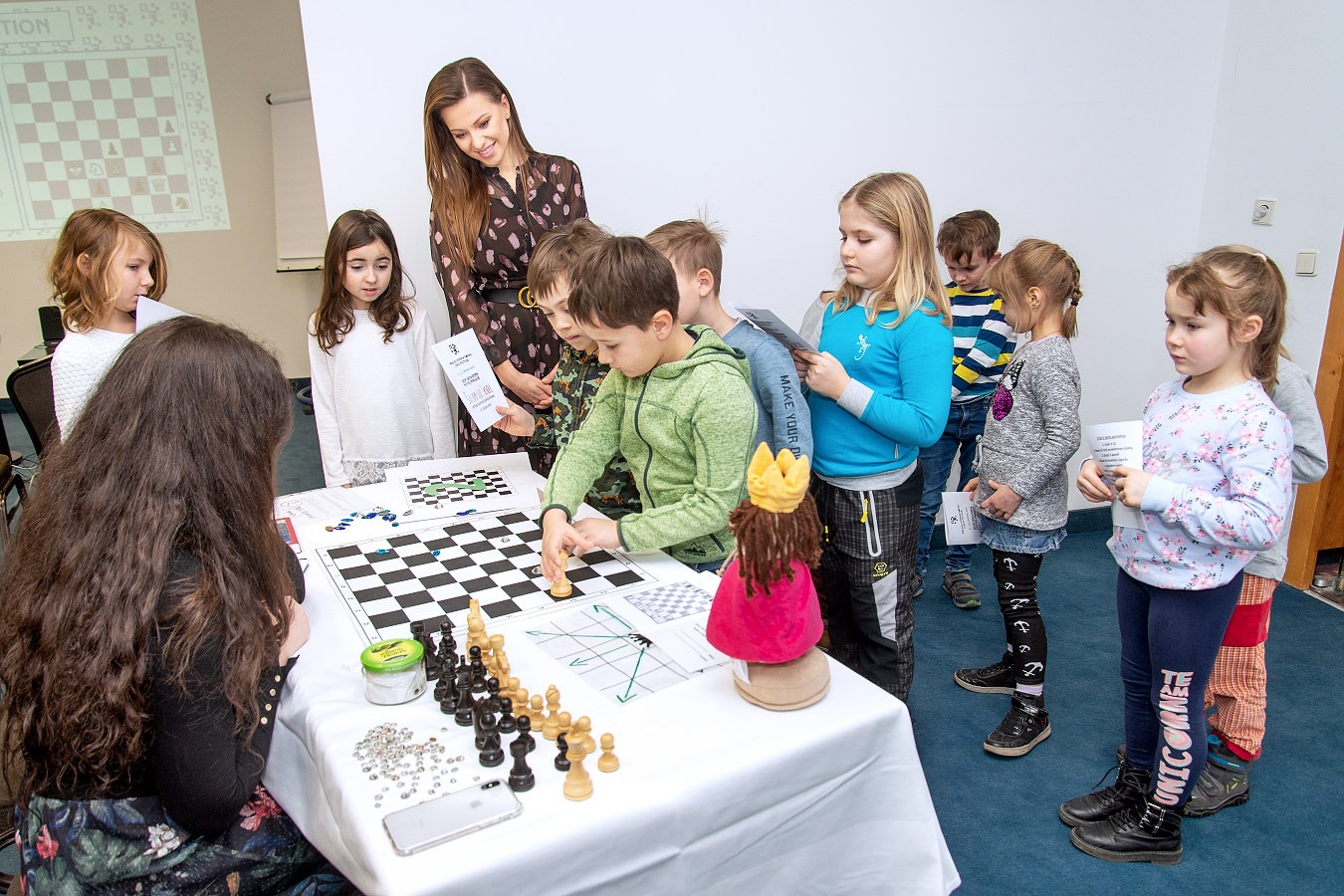 Exhibition simultaneous of GM Boris Gelfand, like many other games at the Festival, was played with the special pieces that were restored by Petr Král. He has been devoted to this hobby for over twelve years. “I currently have about fifty sets, including children's figures. And I borrowed some of them here for the needs of the festival”, said Král. Returning the glitter to the old pieces is his passion. “Sometimes the pieces are completely destroyed. So I remove the color from them and start to gradually renovate them. I divide it into individual parts, add fur, varnish, paint, and so on.” The fact that the tournament is played with his pieces makes Petr Král very happy. “It is a great feeling for me, I am very excited about it. Because this job takes a lot of time and work. And I am always discovering something new, people are bringing pieces to me, so I still have something to do.” T he only victory was achieved by Turkish talent Ediz Gurel and Inna Puhajkova drew. 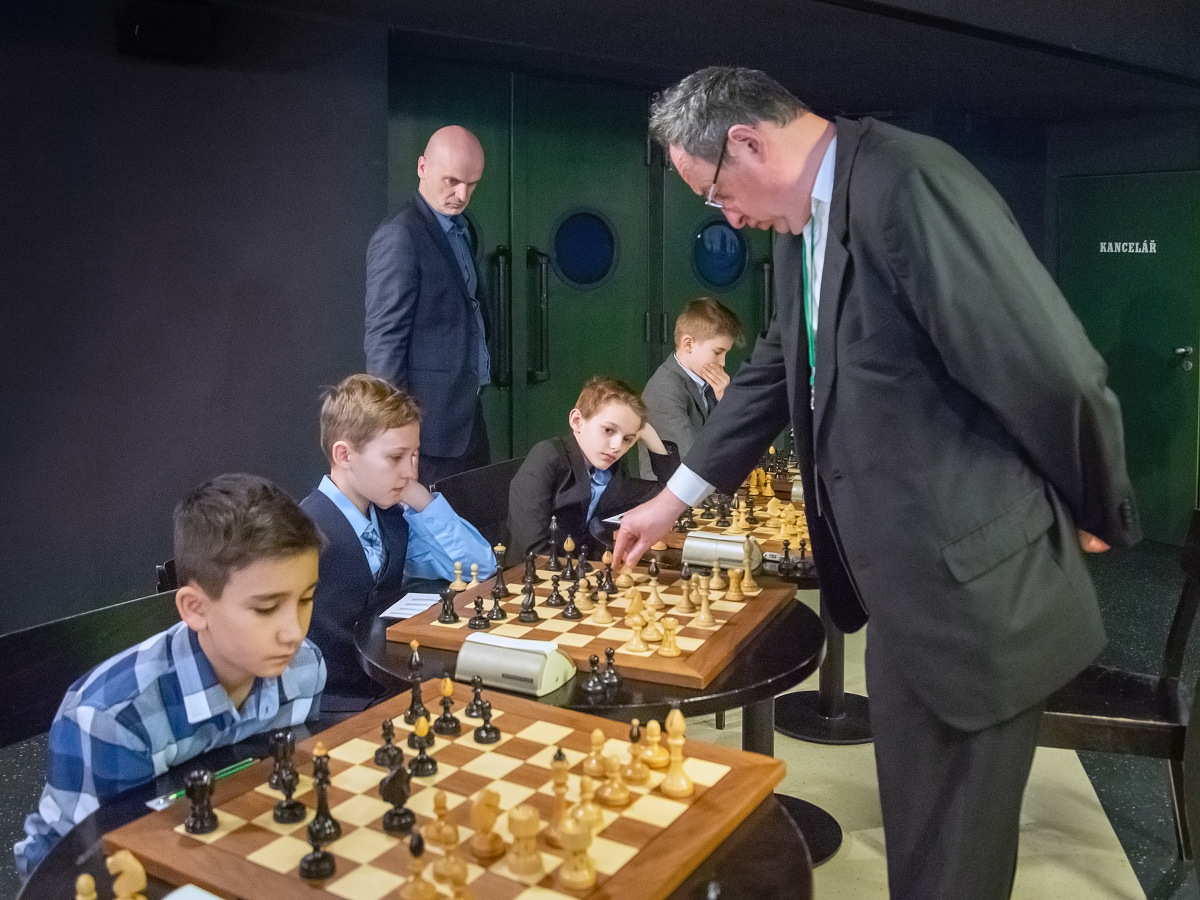 After the simul the Film Festival started

The first film played in the Aero Cinema was the documentary by director Halil Efrat “Album 61”. He captured a chess fight for the World Championship title between Boris Gelfand and Viswanathan Anand, from the perspective of an Israeli challenger. The movie was followed by a lecture by Lubomír Kaválek, on the topic “How Miloš Forman played chess,” where he was joined on the stage by the co-author of Forman's autobiography Mr. Jan Novák. And how did Kaválek meet Forman in the first place? “I went to one of his friend’s apartment and he was just coming out. So we introduced ourselves and Forman tells me that he is in a hurry, but that he considers chess as an ingenious invention like a gramophone… or a light bulb. And with that bulb he just called from the lower floor as he left. It didn't make much sense to me at first, but then I realized that a gramophone was equal to sound and a light bulb was light. And both are the basis of the film.” A great friendship brought Forman and Kaválek together, which was strengthened by chess. The two-time Oscar-winning filmmaker liked the game very much, even so that we owned the old chairs in his office on which the best chess players of that time were sitting. Lubomír Kaválek talked about this at the lecture. “Miloš was in Venice at the Festival, so I invited him to Merano, where Korchnoi and Karpov played together. So we watch them play, and he tells me that those chairs where chess players sit for 5 hours must be very comfortable. I confirmed that to him, and he asked if he could go buy them. So we went to the organizer, Miloš wrote a check and they promised to deliver it in due time. But nothing happened for a long time, so I persuaded the organizer to contact the company, and finally they arrived. And Milos had those chairs in his study, sitting on them when he wrote the scripts ... The Karpov chair broke down in about three years, but the Korchnoi chair still remained. And when Karpov played with Kasparov in New York in 1990, I promised that Karpov would give him a new chair.” 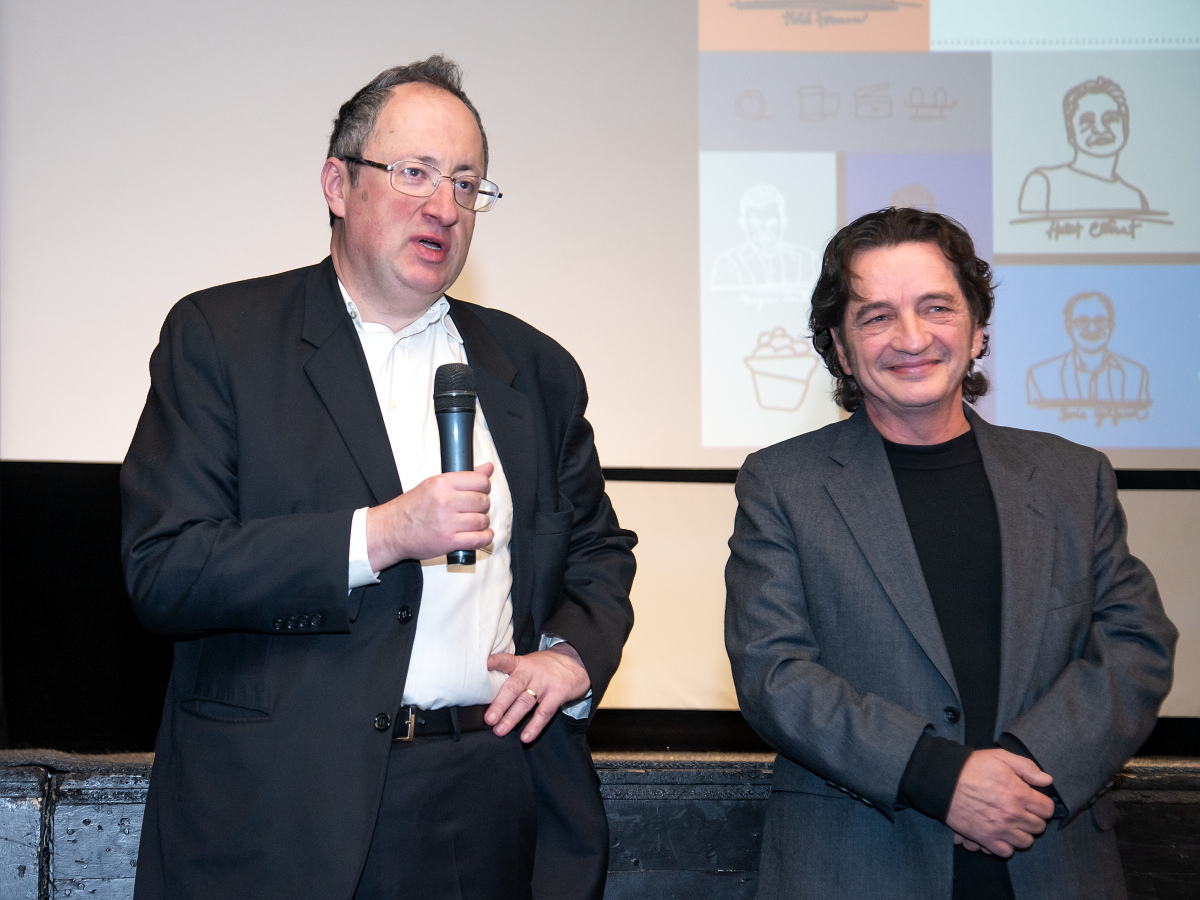 The famous director also played chess and one of his rivals was the current World Champion. “Miloš was in Valencia, preparing the play “A Walk Worthwhile”. And Magnus Carlsen played a simul nearby. And one Spanish journalist thought that Milos, as Amadaeus, could play a game against chess Mozart - the nickname I gave to Carlsen when I wrote about him for the Washington Post.” And the chess game was eventually organized. The director of the “One Flew Over the Cuckoo's Nest”, “Hair” or “Valmont”, did not do well for a while, and in the end he even praised. “They were playing, and at some point, Forman said he didn't know what to do. And he expected Carlsen to advise him. But Carlsen does not react, he is like a statue. So Miloš thought for a moment and then played something, and Magnus said it wasn't bad at all. And Forman then told me that at that moment he felt as if he got the third Oscar”, Lubomír Kaválek recalled. His lecture was followed by a documentary film about the current World Champion simply named “ Magnus”.

The chess players will return to the Don Giovanni Hotel for the 6th round. Pavel Votruba, the Chief Arbiter, evaluated the course so far. “We have quite surprising leaders, especially in the Challengers group. Icelandic Grandmaster Hannes Stefansson is in charge. He won the Open last year. So he would seem to be a newcomer, but it is the opposite. He plays solid chess, he gets everything he wants, and opponents simply do not have their days against him. We will see what happens, but a half-point lead before the last four rounds is quite significant”, says one of the most respected and successful chess arbiters in the World. And how are things going in the Masters group? “The A-tournament is lead by Indian GM Vidit Gujrathi, who by the way plays for Nový Bor Chess Club. On Sunday he defeated the best junior of the world GM Firouzja, in a very quick game. Firouzja played exactly as he shouldn’t, which proves that he still lacks experience. Otherwise he wouldn't allow the action on the Queen’s side. But I have already seen several of his games with Black pieces which were not so strong. Of course, that helped Vidit, and he is now leading by a full point, which is enough. There are four rounds to the end, so if you were to bet on a winner like in a horse racing, the odds would be small”, thinks Pavel Votruba. Vidit will face the last year's winner Nikita Vitiugov in the 6th round. The only Czech in the prestigious Masters category - David Navara - will face Alireza Firouzja.