Vidit and Stefansson maintain the lead with 4/5

Day 5 of the 2nd edition of Prague Chess Festival kicked off with the first move made by Don Giovanni and Czech Inn Hotels co-owner Mr. Jaroslav Svoboda in the game Navara vs Grandelius. 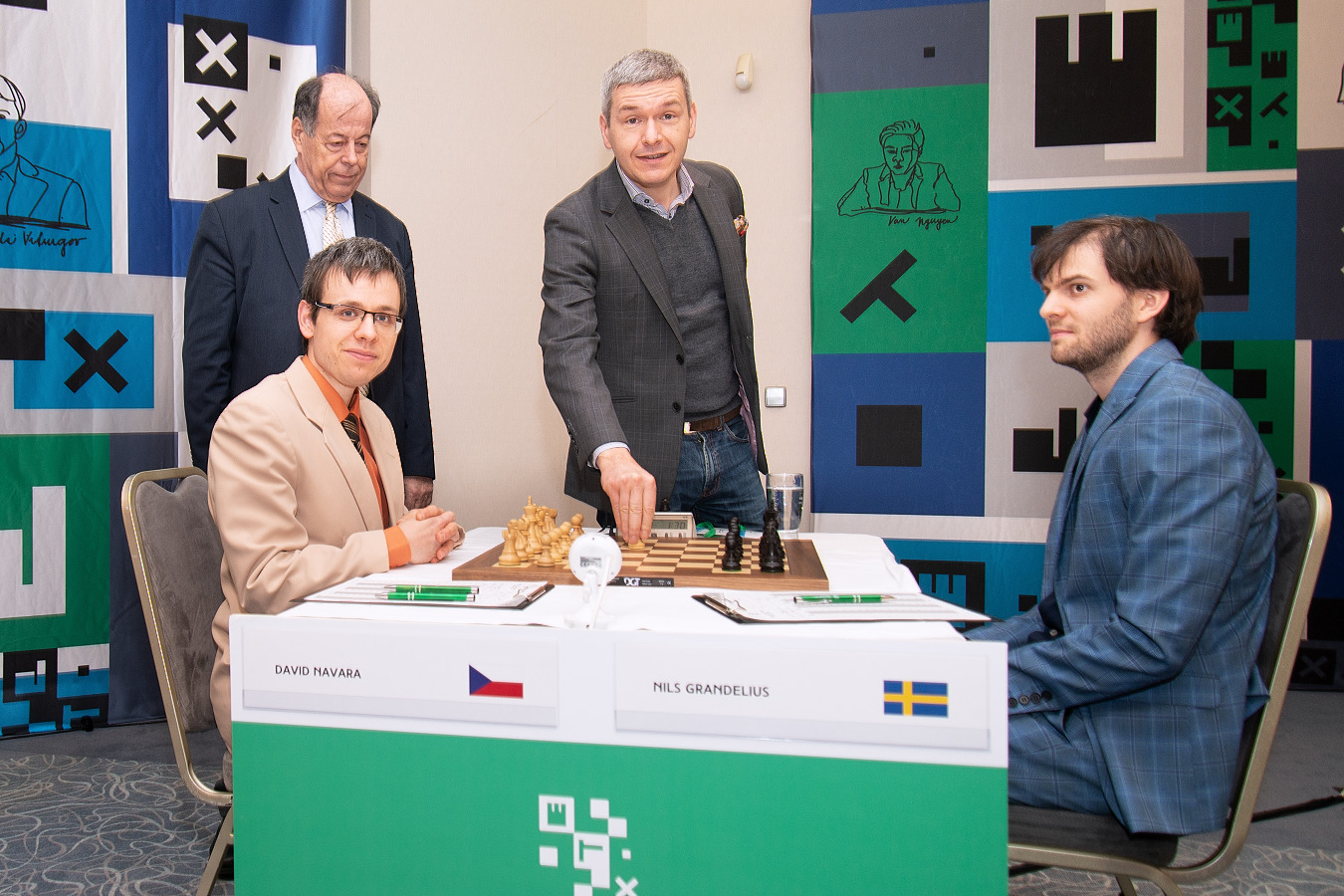 Famous member of the Novy Bor Chess Club, as he was announced by the Tournament Director Mr. Petr Boleslav, Grandmaster Mateusz Bartel was awarded by the prize “Game of the Day” for his victory over Jan Krejci in the 4th round of Challengers. 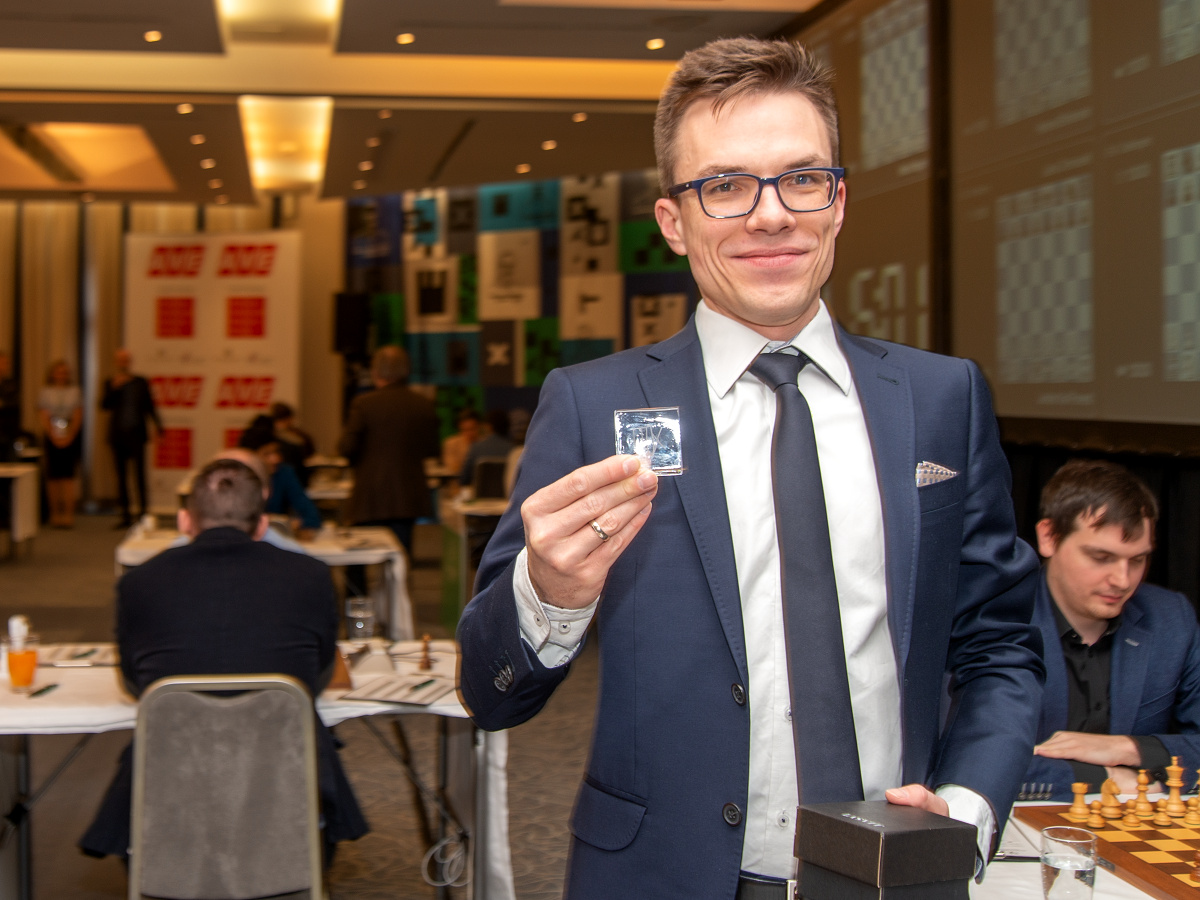 To general satisfaction of the local fans, the only Czech player in the Masters section GM David Navara clinched his first victory of the tournament. He defeated Grandmaster Nils Grandelius in a very sharp and double-edged game.

“This line was played by Grandmaster Gelfand in some rapid game before, and, of course, it is a risky way to play with White, but it’s tricky and there are some problems which Black needs to solve. I wanted to surprise Nils and I was in the mood to play something sharp. Actually, after the opening, Black’s position looked very good to me, I was afraid I could have problems, but luckily I had 24.Rd3 move, protecting both my Knight on c3 and e3 square. Then Nils got into problems, I expected him to exchange Rooks and somehow make draw. Before the time trouble it got really bad for him, but I chose very complicated way to win, even though there were many much easier way to finish the game” , said Navara in the interview after the game. 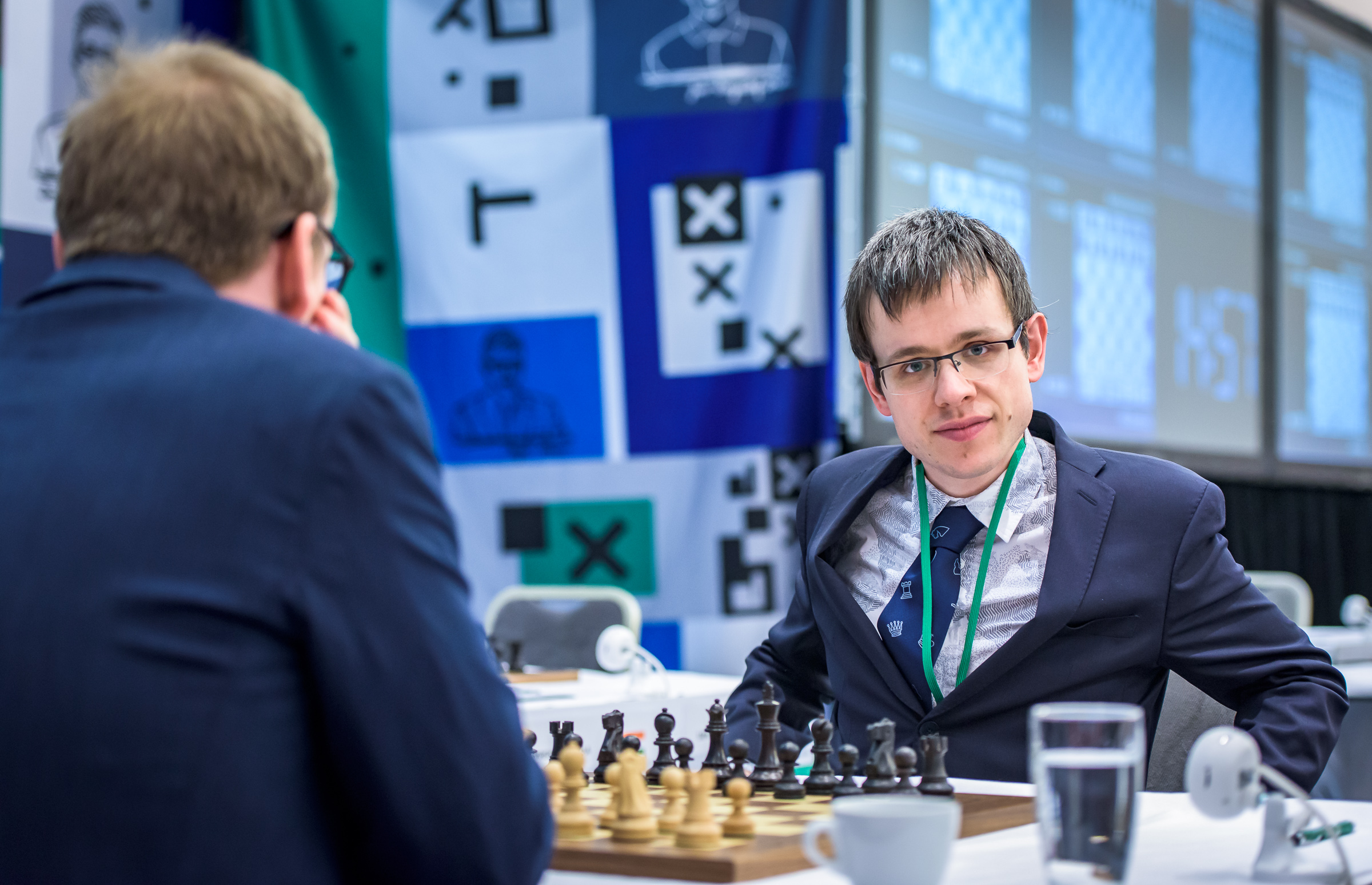 The leader of the tournament GM Vidit Gujrathi didn’t have a difficult task today against Firouzja, as the young star played dubiously and was practically lost after move 13.

“I did not expect such an easy win, but I am happy that it happened. After 9.Be2 I was considering only 9...Be7 or 9...Bd6, and I was quite surprised why he was thinking for 10-15 minutes in this position. After he played 9...Qb6 I realized he wants to take on b2. After 10.0-0 and 11.Na4 it is very simple, and 12.a3 is a very important move because I always have the idea to go Nb6 and Bc7. The way he played he immediately collapsed. I am happy with the way the games are going, even yesterday I managed to play a good game with Black and defend well” , told the Indian Grandmaster. 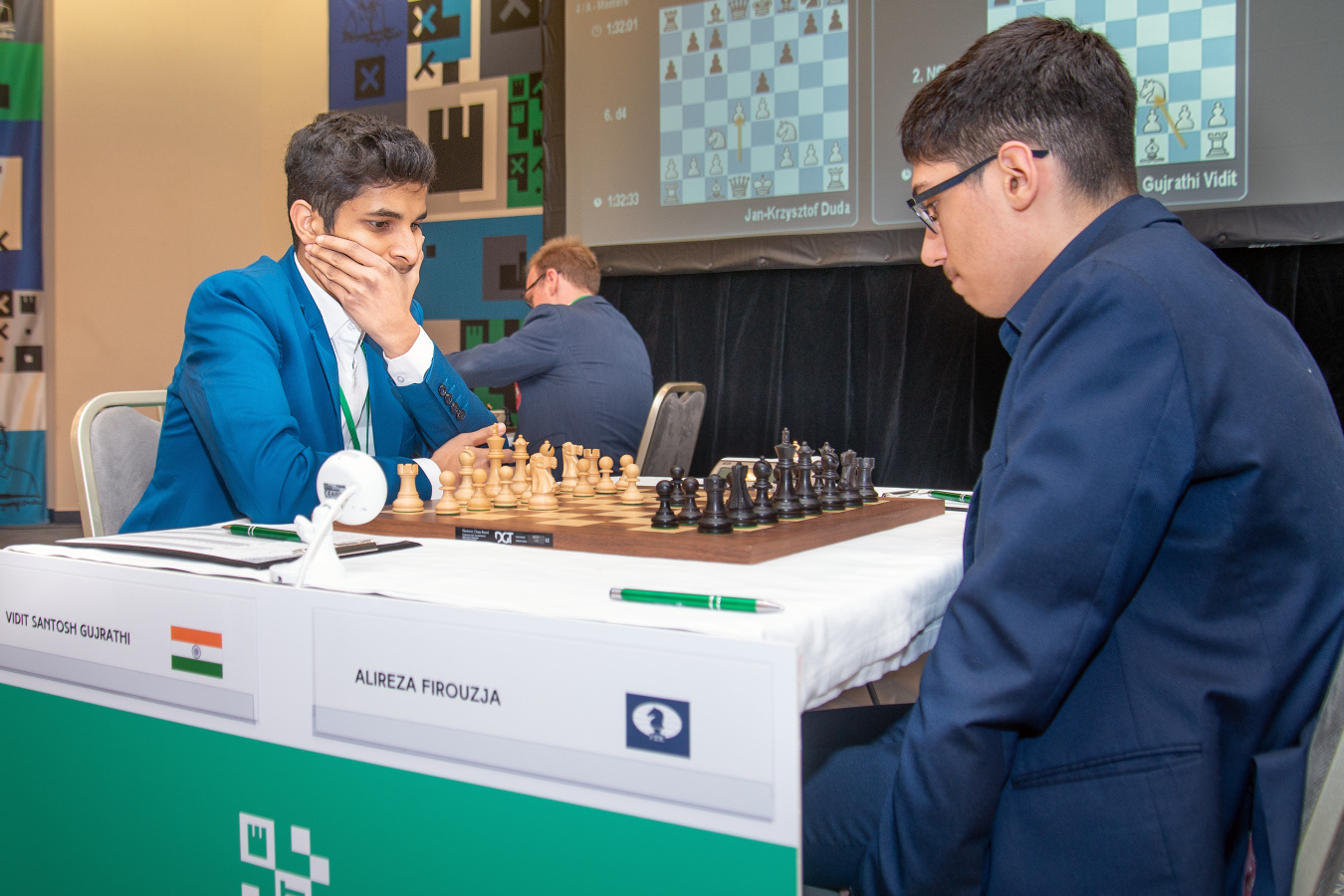 Former US Champion Sam Shankland was so close yet so far from scoring his first win, as he missed a huge advantage against David Anton. Shankland decided to spice it up with early 4.f3 in Indian Defense and try to get Anton out of the book. And it worked, as Shankland gained clear advantage after the opening. However, few inaccuracies and suspicious trades towards the time control gave the chance to the Spaniard to somehow get away with a half a point.

Vitiugov vs Harikrishna was a very interesting game, where White offered an attractive exchange sacrifice, which would lead to further complications, but nevertheless, easier play for White. Black did not take the bait, and went into a worse endgame, with hopes to get a counterplay and somehow hold.

Vitiugov: “We played the London system, and I had some ideas in the opening, I offered an exchange sacrifice which I think was interesting. After the opening I believe I got a very promising position, but it seems it was not so much better as I thought. Somehow I wasn’t able to find a proper way to maintain the pressure.”

Hari: “It was an interesting game. He offered the exchange sacrifice, which I declined, I am not sure if it was right or wrong. I was trying to figure out if it was easy to calculate, but some of the moves were quite difficult, and I didn’t want to spend too much time on just one decision, and that too early in the game. Therefore I rejected his offer and I got into a slightly worse position, where I had to find some concrete way to equalize. I decided to sacrifice a pawn, and I had nice Knight on d5 which I thought was nice compensation for the material.” 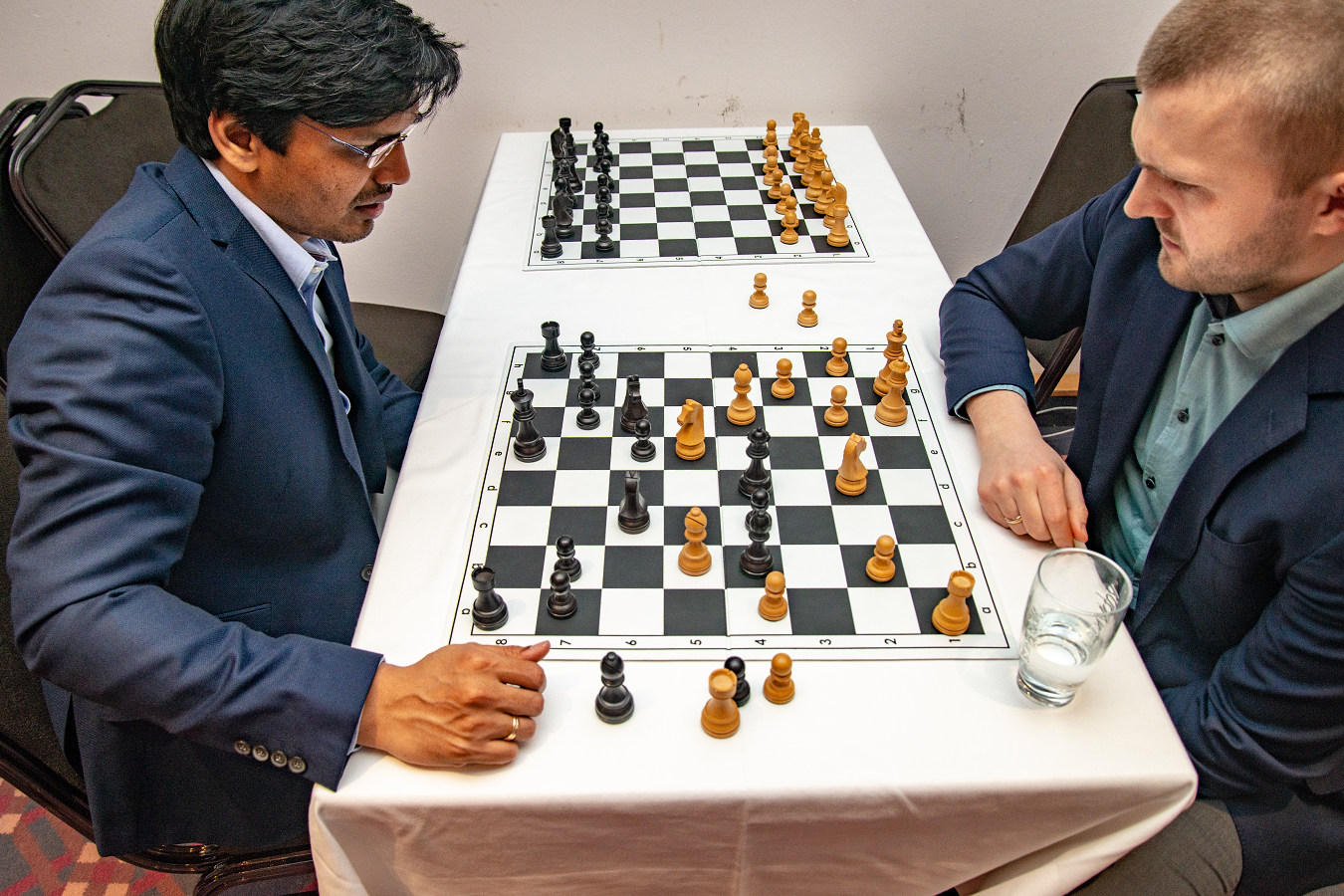 In the game between Duda and Ragger Black was definitely pressing but without any concrete threats, and White was able to hold comfortably.

In the Challengers group veteran Grandmaster Hannes Stefansson from Iceland, who got the chance to play by qualifying from the Open event, is leading with 4/5. He showed some impressive play so far, and it remains to see if he can continue in the same manner after the break.

“I am really surprised with my result to be honest, I expected to be at the bottom of the tournament. I think today my opponent mixed up the move order, maybe 13...Na5 first, I am not sure, it is slightly better for White anyway. I think he should have played c5, without it, it’s just an awful position for Black” , told Stefansson to the press. 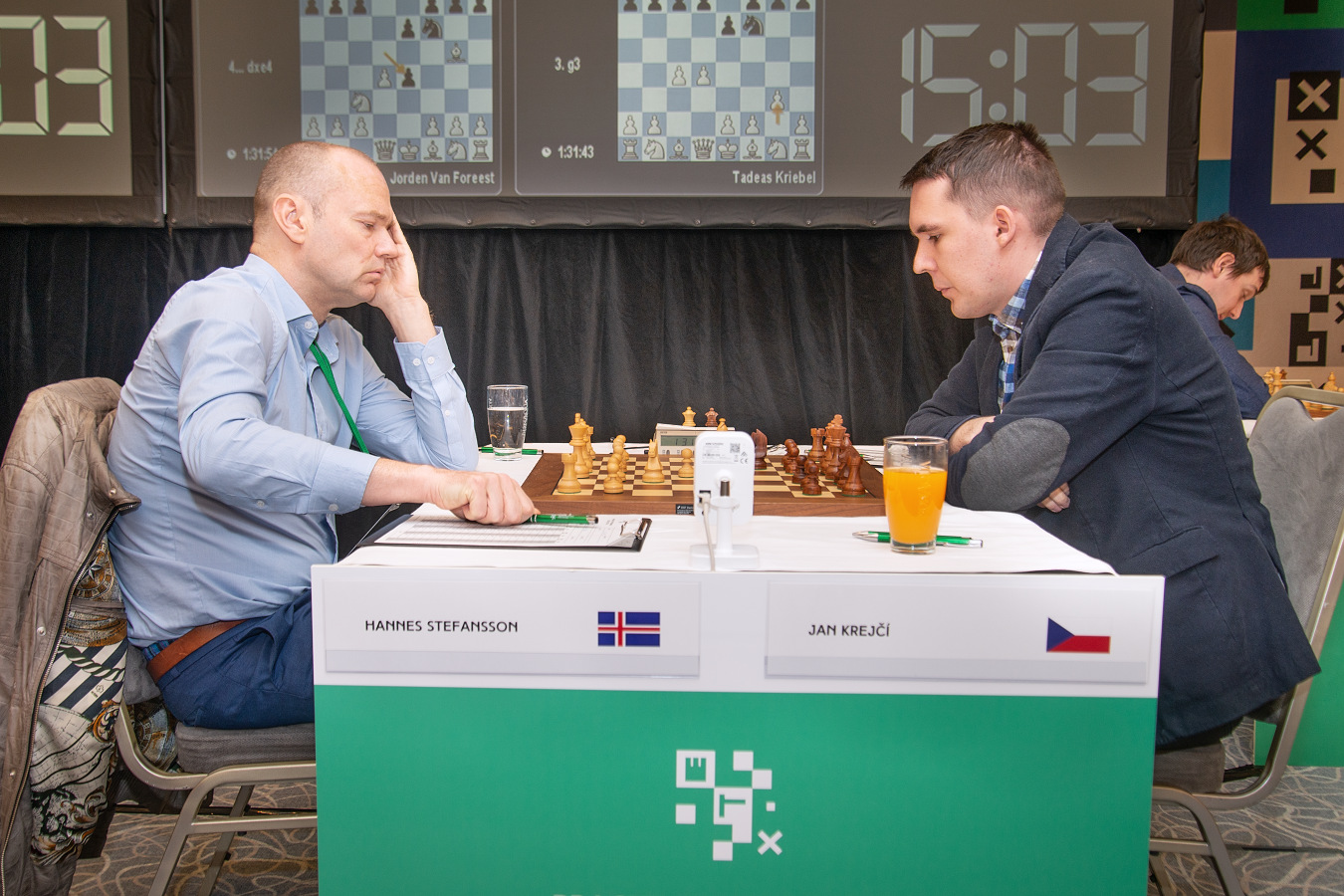 Young Russian Andrey Esipenko was not very satisfied with his games at the beginning of the tournament, but since then, he scored two victories, including today’s against Tadeas Kriebel.

“I didn’t expect what happened in the game, I was actually preparing for 1.e4. So I followed my game against Gelfand from the World Blitz Championship, which I won. I think it should be fine for Black, but my opponent played very aggressively and found some very interesting ideas. He definitely had an advantage, but somehow it slipped, I am not sure in which moment exactly. But afterwards I overtook the game.”

The 17-year-old is looking forward to the rest day, and especially to the football match, which is scheduled for this evening. 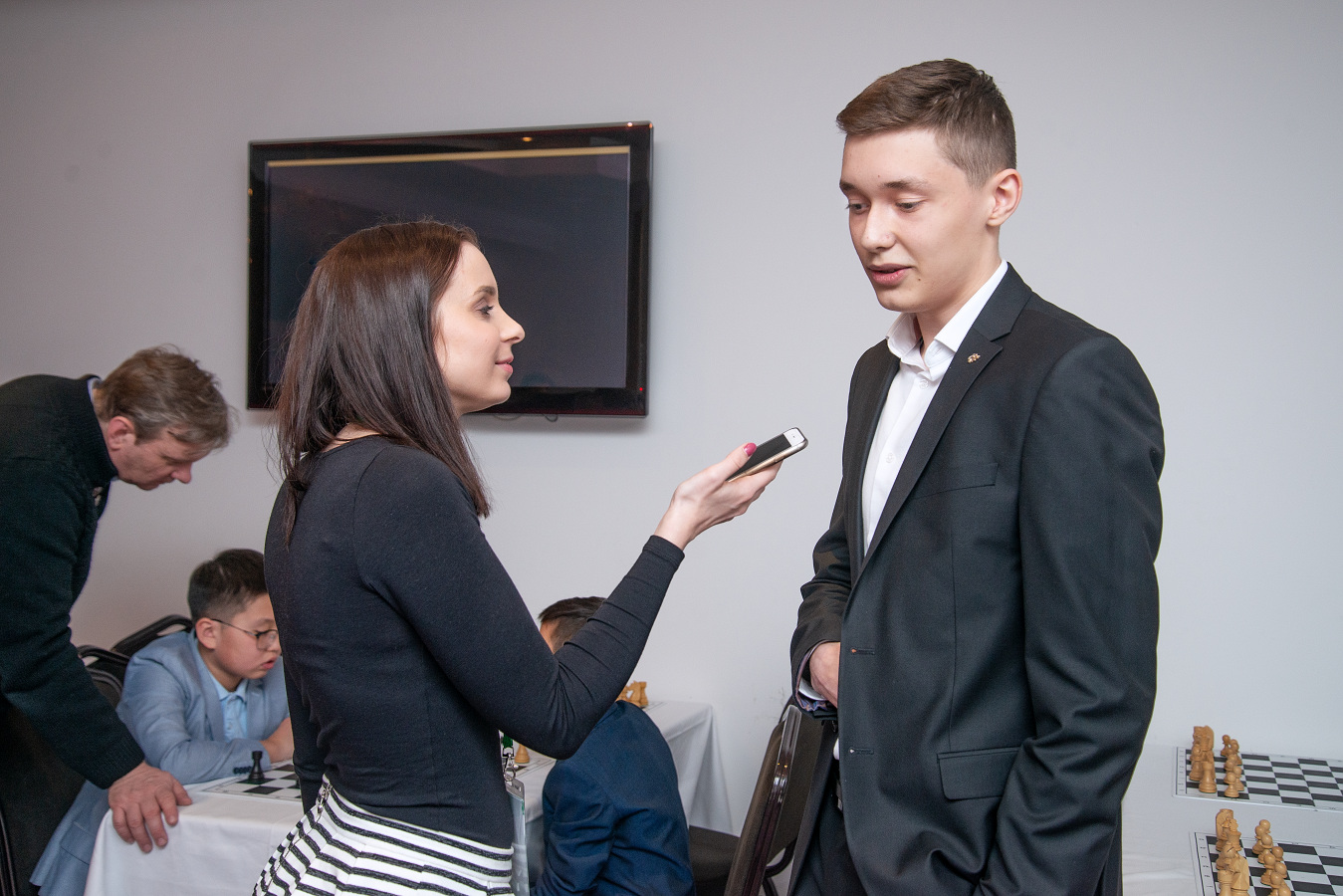 Mateusz Bartel can definitely be satisfied with his score before the rest day. Today he defeated the top seed Nijat Abasov and with the second win in a row he shares 2nd place with 3.5/5 along with Esipenko.

Mateusz: “Initially I wanted to take on c6 on move 18, but I was happy I found the idea 18.Rad1 first, to improve my position. The difference is that with Bishop on e8 he can take 19...bxc6 as it happened in the game, but I thought, whatever happens, I should be much better because my Knight on c4 is dominating in comparison to Be8 which is very passive. Last year I finished with only 2.5 points, and this year it is much better, and I am happy so far. Today we play a football match against Czech Inn Hotels employees, we formed a team of Grandmasters - players of Masters, Challengers and Open tournaments, and I hope it is gonna be fun!”

In the Futures event, the leader Roy Vagman lost to Ediz Gurel, who overtook the sole lead with 4/5. Czech players Finek and Nemec scored against Klimkowski and Azdin respectively, while Brozka drew with Nadzamova. Bulgarian player Nikola Kanov defeated Bayaraa Chinguun from Mongolia. 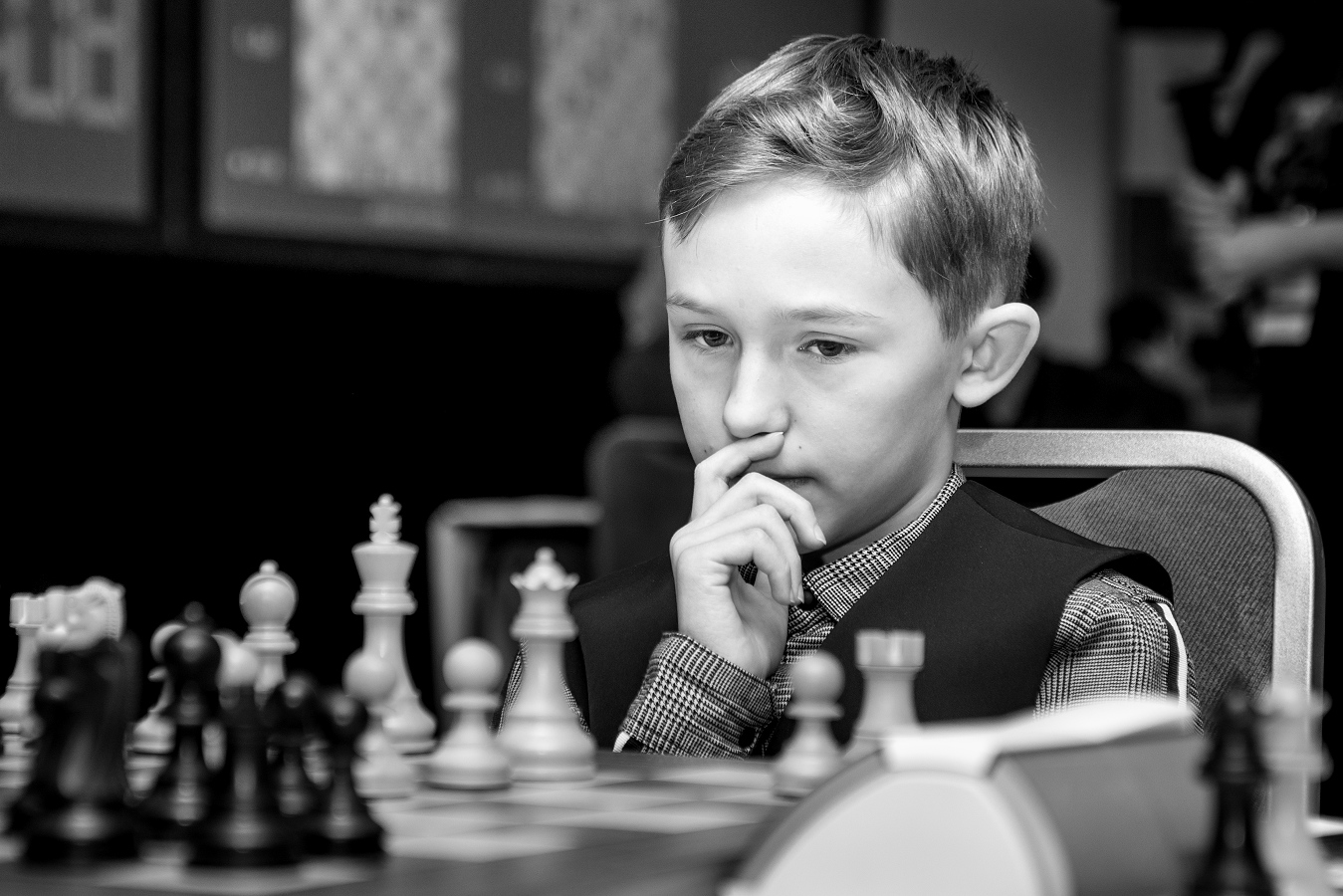 Tomorrow is a rest day, and round 5 of Masters, Challengers, and Futures continues on Tuesday 18th February, at 3 pm (CET). The games of Open and Rating tournaments go on without rest day, so the 4th round is on schedule on Monday 17th February. 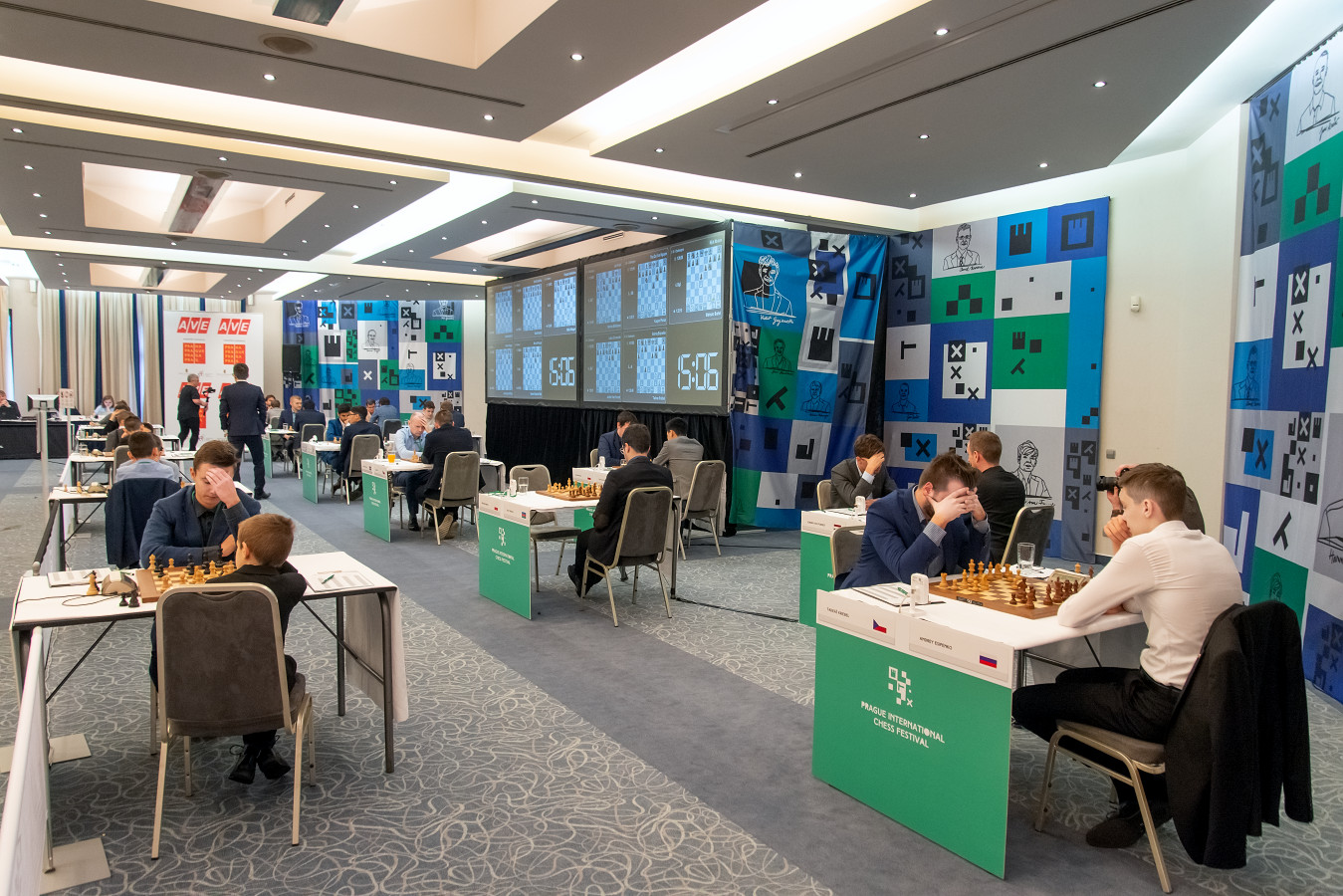 View to the playing hall

The organizers prepared an interesting program for the rest day. Starting from 9 am at Don Giovanni Hotel we will have a “Children's Day”, a set of competitions focused on practical chess skill, knowledge of chess history as well as on imagination and dexterity. The patron of Children’s Day is the Czech model Inna Puhajková.

Another interesting side event is the Film Festival which will take place in Aero Cinema 17-19 February. The Festival will be opened by the “Album 61”, a documentary about Israeli Grandmaster Boris Gelfand, directed by Halil Efrat. Mr. Efrat and GM Gelfand will be the guests of the Film Festival, and the Israeli Grandmaster will also play a simul against the players from the Futures event at 3 pm at the Aero Cinema.

Full program of the Film Festival

Another lecture with the title "How Miloš Forman played chess", by the Czech-American writer Jan Novák and the legend of Czech and World chess, Grandmaster Lubomír Kaválek will be held at the Aero Cinema, starting from 7.30 pm.