Don’t let the draws fool you!

Round 2 of the Prague Chess Festival started with the first move was made by the Manager of the Czech Youth Team Mr. Petr Pisk in the game Nadzamova vs Finek of the Futures event. 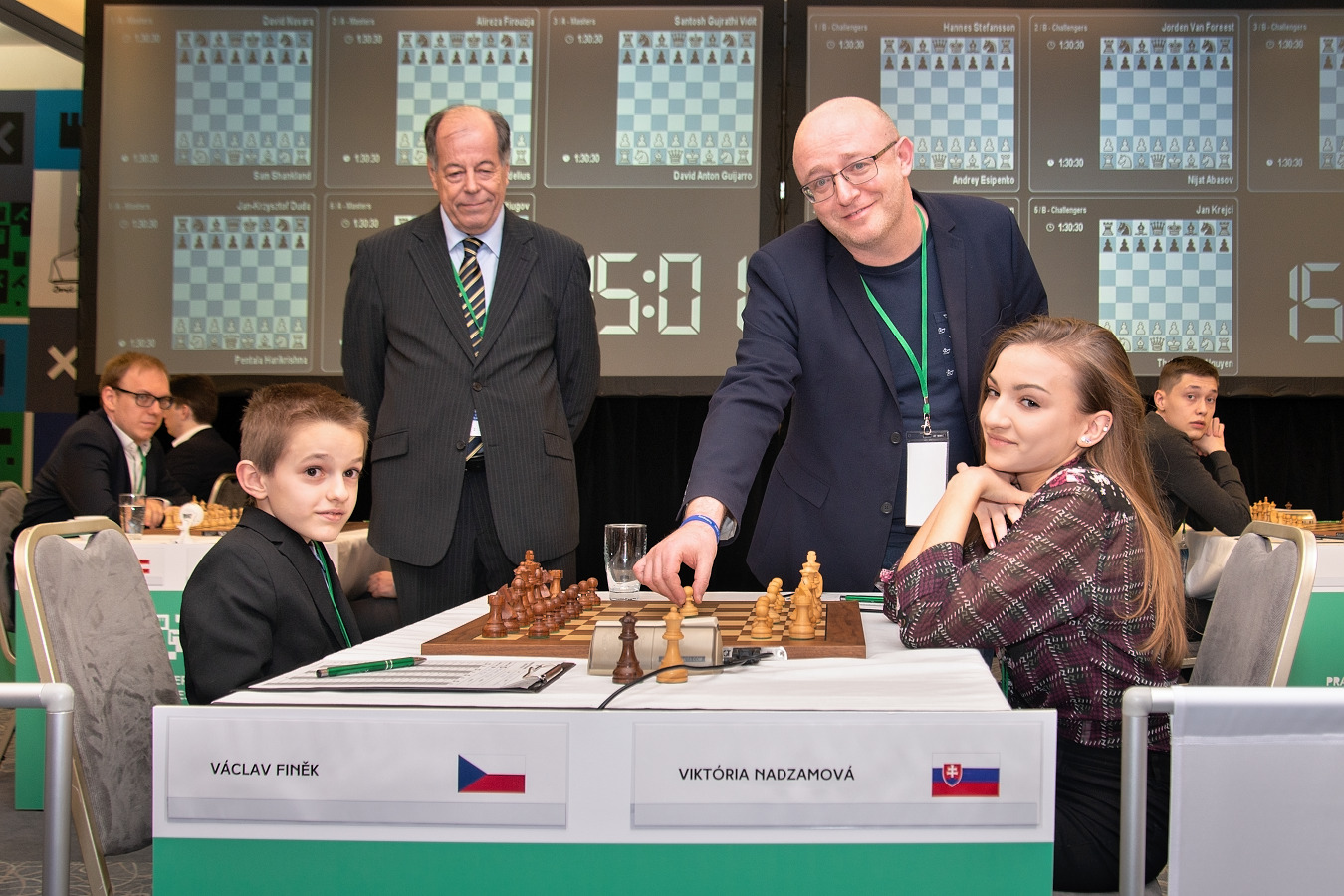 The organizers continue the nice tradition from the last year, to award the best Game of the Day prize to the players. The first winner of the 2nd edition is Indian Grandmaster Vidit Gujrathi, who was rewarded for his victory against Sam Shankland in the 1st round. 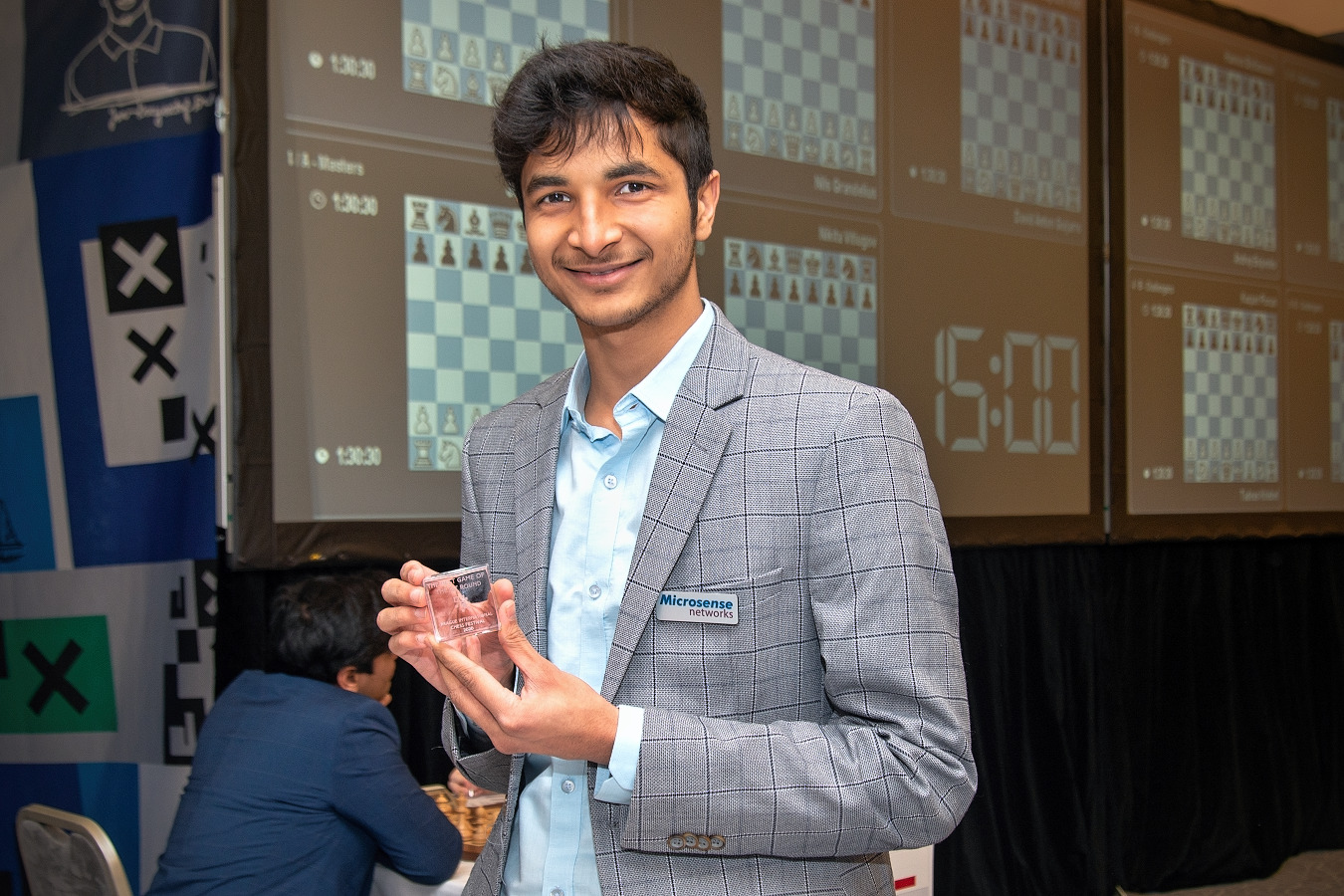 Vidit Gujrathi had the best game of the 1st round

Despite there was only one game that finished with the decisive result in both Masters and Challengers, we saw a lot of excitement and fighting chess today.

In the Masters group the first game to finish was Harikrishna vs Duda. “I thought I had some chances, but I missed 14. Qd7. It is a rather simple move, with which Black is completely fine”, said Harikrishna.

Shankland vs Navara looked promising for White, but Navara found a way to equalize. “I was probably slightly worse after the opening because my Knight on a6 was misplaced. But then I managed to activate it and equalize”, commented Navara after the game. 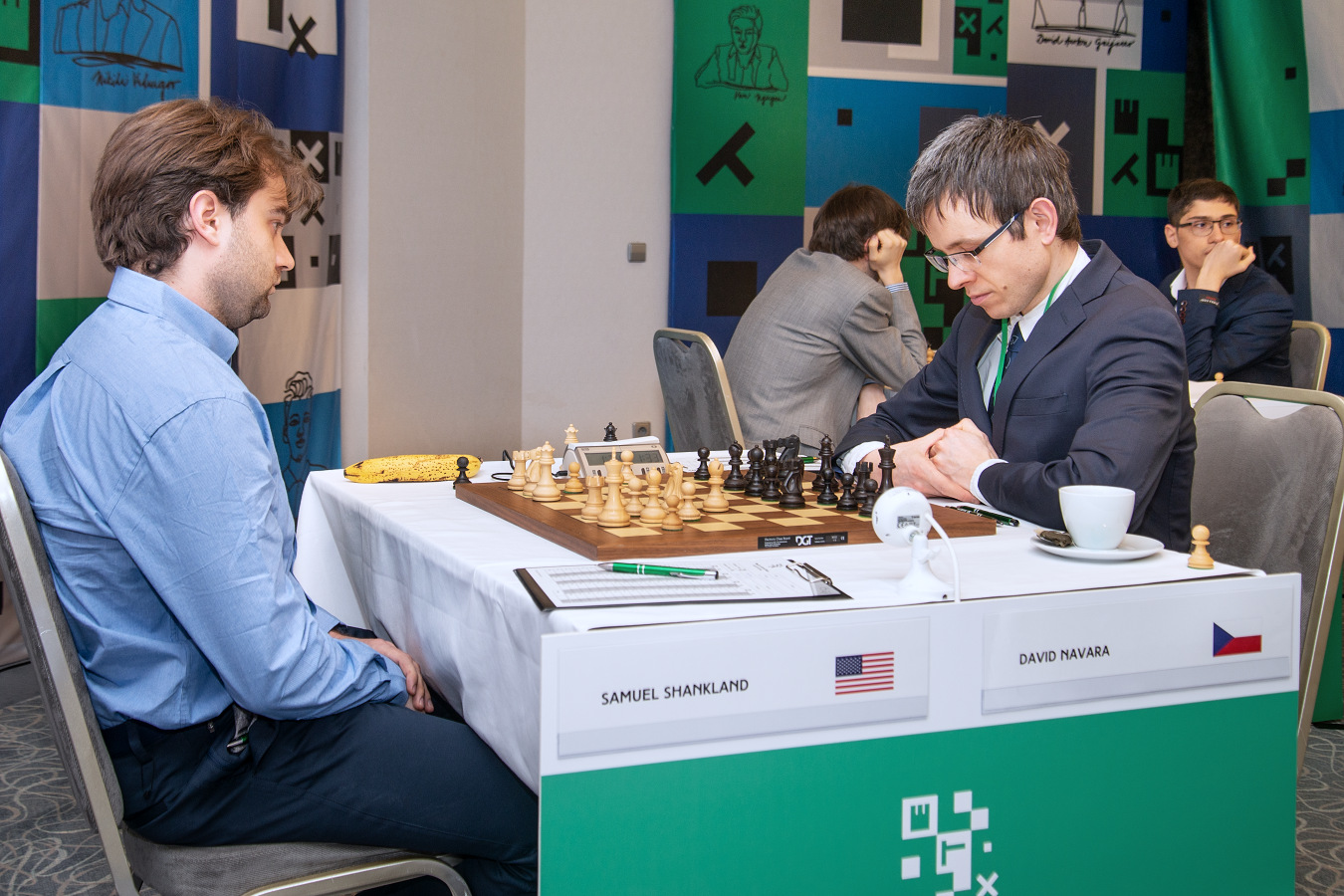 Shankland vs Navara was draw

The game between Markus Ragger and Nikita Vitiugov also looked better for White, however, Black found a way to activate, and soon the draw was agreed.

Ragger: “I think we were both happy with the opening. But after the opening I was obviously better. I think 24...h6 was a nice move. I thought I was better in the endgame, but he gets counterplay and it is not clear at all. Probably I should have found a better way to enter the endgame after h6. Because it is difficult to evaluate, I am a pawn up, but he is active.”

In the game Anton vs Vidit we saw a very interesting positional sacrifice by Anton. He decided to sacrifice an exchange to create some winning chances.

Anton: “I think I played a really good game, the position after the opening was equal, but then I saw this nice idea to exchange Knights followed by 28.Rb5 exchange sacrifice. After this maybe Black could have played better, I am not sure. Eventually, I missed 46.Ke5. I am happy I played a good game, but unfortunately, in the end, it all came to one move which I missed”.

Vidit was happy to have saved a difficult position: “I thought I was fine after 24...a5, but then I saw Rb5!!”

Nils Grandelius was pushing against young star Alireza Firouzja, but after 80 moves and more than 5 hours of play, they agreed to a draw.

“I think it looks like I have nothing at all, but actually it is not so easy for Black, as my Knight is stronger than his light square Bishop. At some point he made a mistake not to trade the dark square Bishop, he should have played 24…Bg7 and with this move he would have been slightly worse, but it is only a small advantage for White. When he let me go Bg5-Bf6 the position must be very dangerous for him. After that, I am not sure, probably we both didn’t play in the best way. To avoid mate, he went into an endgame with a pawn down, which is probably winning for me, but I should keep the Rooks. The big thing in this whole endgame was exactly what we got in the game, he goes h5-h4 and he is in time with h3, followed by sacrificing on e3. And basically, this I have to see before I trade Rooks, which I didn’t! 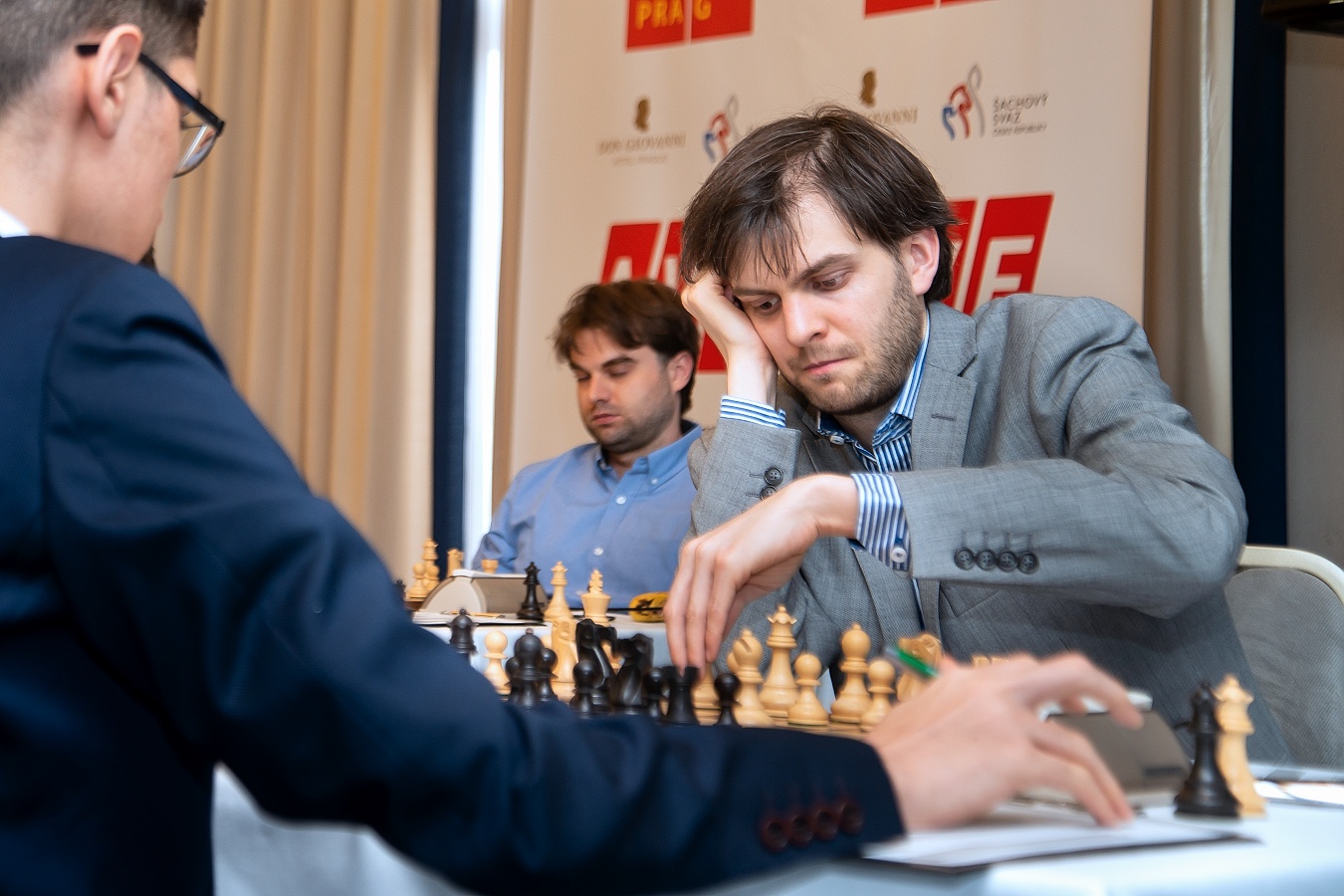 In the Challengers event there was only one winner of the round. Kacper Piorun defeated Tadeas Kriebel, who is having a really bad tournament so far with 2 losses in a row, despite having a clear advantage in both of the games.

Piorun: “I think my sacrifice was incorrect. However, taking on c5 (41.Bc5) was definitely a mistake, even though it didn’t look like it. I think he missed 42...Kf8, because after that I just put my Knight on d4. My position was pleasant, and it is easy for him to collapse, because of many weaknesses.”

Abasov vs Van Foreest was the first game of the 2nd round to finish. It ended in a peaceful draw, and there is nothing much to say about this game.

In all Czech derby, Van Nguyen was pushing against Jan Krejci, and even after time control his position seemed more pleasant, he decided to agree for a draw.

In the game Bartel vs Cernousek a strange moment occurred, when Black thought for more than 50 minutes on a move 13. Mateusz was kind enough to share his thoughts about the game and clarify this rather odd situation: “ During my preparation, I had a strong feeling that my opponent may use a "drawish" strategy. From this point of view the opening (Four Knights Game with 4. d4) didn't come as a surprise, even when his standard choice was the Ruy Lopez. I came prepared for the game and after 12...Nxe4 I was still in the book, while Cernousek needed 51 minutes to execute his next move. The game quickly simplified, but with a huge time advantage I was quite optimistic about my chances. My opponent, however, defended quite well. I probably could have posed him more problems in the rook endgame, but it's more likely that it was drawish than anything else.” 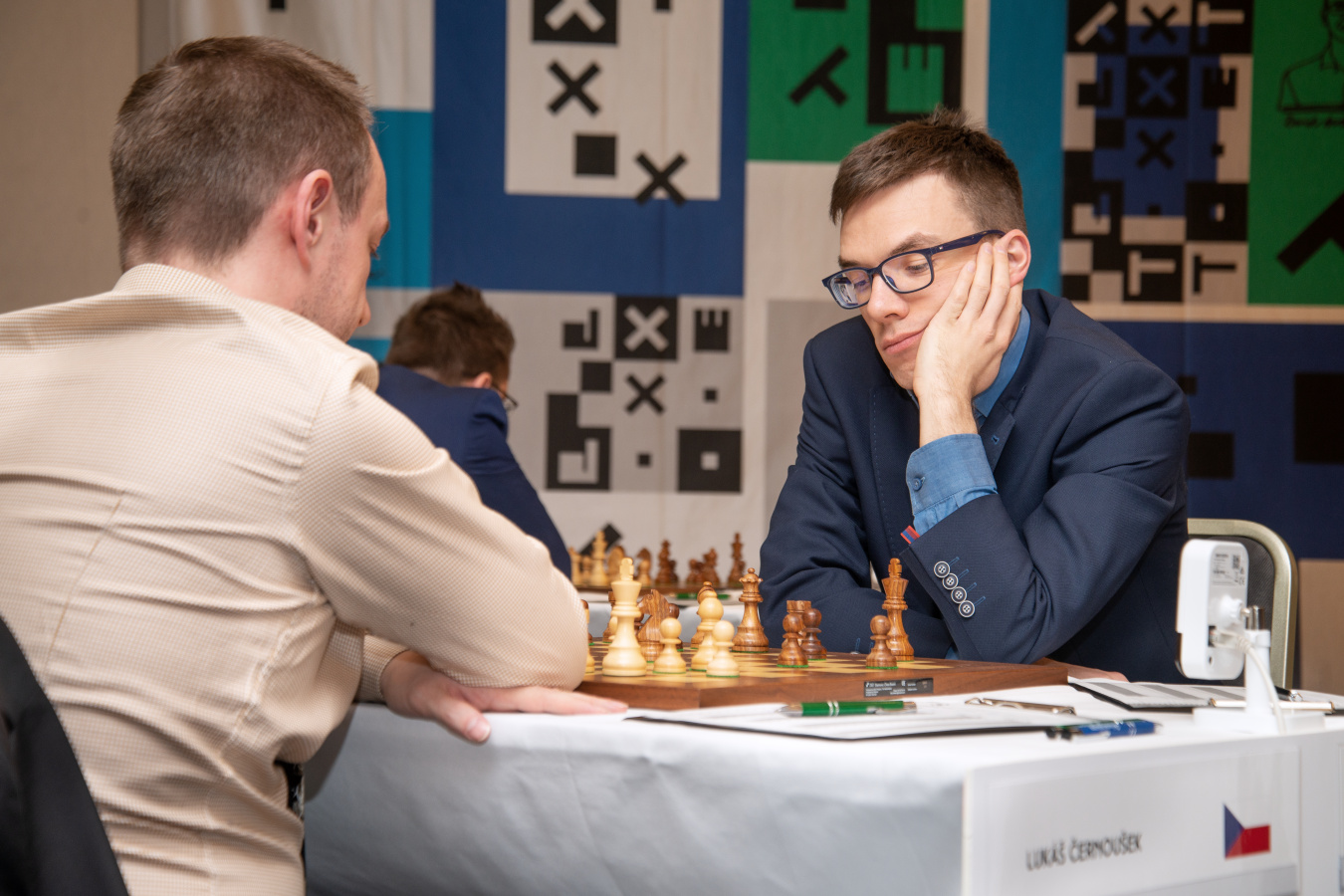 Esipenko vs Stefansson was really a crazy game. From the very beginning, the position was imbalanced and double-edged. Probably it was Black who missed more chances, but it was difficult to say as it took a lot of calculations to evaluate the position properly. Eventually, we saw a massive trade of material and the position was heading towards a draw.

Esipenko “I was expecting this line in the opening. But, I didn’t know about 6...b5 without pawn on d6, and maybe I played bad, I am not sure about 7.e5. It was a very complicated game.”

Stefansson agreed the game was complicated and required a lot of calculation. He honestly admitted: “I was ready with my preparation, but once I sat at the board, I suddenly forgot everything.”

In the Futures, Klimkowski defeated Brozka with White after a series of Black’s mistakes. Turkish derby between Aydin and Gurel ended in a draw, as well as the game Chinguun vs Vagman. Bulgarian Kanov won a nice attacking game against Nemec, and Finek won 2nd game in a row and is now the sole leader with 2/2.

A Rapid event was also played today, parallel with the round 2, with more than 50 participants. Seven rounds were played, with time control 10 + 5. Six players tied for the first place with 5.5 points, but thanks to the best tie-break, Czech IM Jakub Pulpan triumphed. Second place went to FM Dragos Ceres from Moldova and the third place went to GM Daniel Alsina Leal from Spain. Final standings

Polina Shuvalova, Junior World and European Chess Champion, will also participate in the Open event. This 18-year-old chess player from Russia has experience with the Czech environment. She has already represented the Women's team AVE Nový Bor at the European Club Cup 2019 in Montenegro and will do so this year as well. “ I enjoyed it very much. It was the first time that Nový Bor put together a women's team and there was a great atmosphere. Together with the Men's team, we were cheering for each other, it was great.” In the Open tournament, she may not count on similar support, but she is looking forward to it anyway.

Round 3 of Masters, Challengers, and Futures is scheduled on Friday 14th February 2020, at 3 pm (CET). Open and rating tournaments start tomorrow as well, and we expect a fully packed playing hall with players and visitors.

All the chess fans are welcome to visit the Festival at the Hotel Don Giovanni to watch some of the best world chess players in action. The organizers provided the live commentary by Grandmasters Babula, Šimáček and their guests, so make sure to follow the games online on our Twitch channel .  Be sure to check out the highlights and daily reports on our YouTube channel. N ews, photos, schedule and more on the official website .  Our official photographers are Vladimir Jagr and Petr Vrabec.  Photo gallery