Today, Prague chess fans had the unique opportunity to meet the Czech chess stars Grandmasters David Navara and Thai Dai Van Nguyen, and try their luck in speed chess against them.

As an excellent overture to the 1st edition of Prague International Chess Festival, which starts tomorrow in Hotel Don Giovanni, the organizing team prepared a 30-min ride in an old tram, with Czech #1 and #9 Navara and Nguyen, as a fun way to interact with the Czech top players, as well as play some Blitz games in relaxed and casual atmosphere.

The so called "chess tram" started from Andel tram station at 10.30 and went all the way to Zelivskeho, directly to the Hotel Don Giovanni, the official venue of the Festival. Few days ago, the organizer published a chess problem on the website of the event, looking for the correct solution from the audience. The reward for the right answer was the ticket to "chess tram"! The winners of this special competition were Jaromir Buksa, Dan Krautschneider, Nikola Markovic, John Tadros and Zdenek Joukl. The put a great fight and made our Grandmasters sweat, but eventually the strength prevailed. 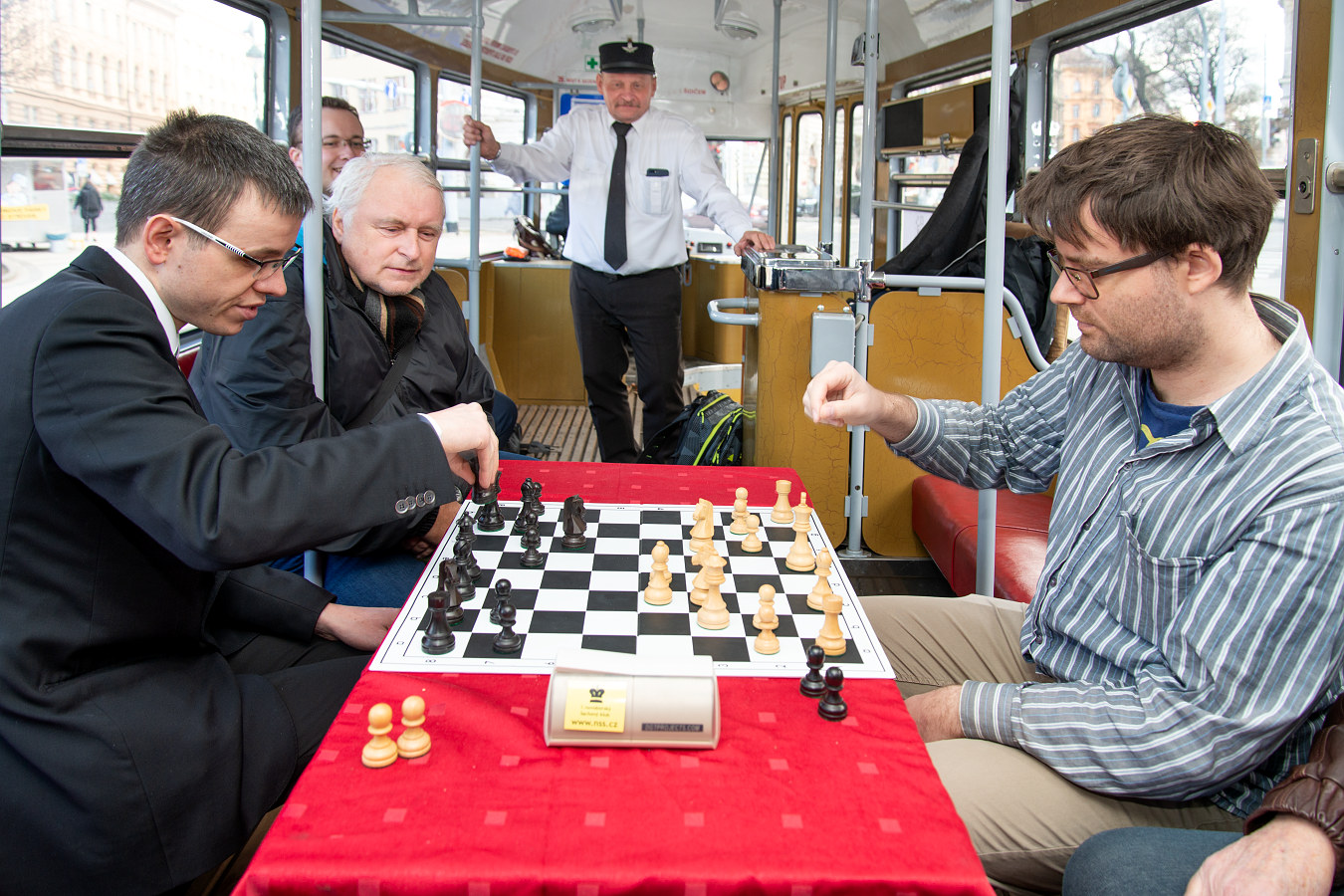 This unique event was followed by numerous media representatives, and attracted lot of attention from the public.

At 11.00 am, in Hotel Don Giovanni, the press conference took place, with the attendance of Grandmasters Ju Wenjun, David Navara, Harikrishna Pentala, Boris Gelfand, Thai Dai Van Nguyen, Chief Arbiter Mr. Pavel Votruba, tournament Director Mr. Petr Boleslav, and Mr. Martin Petr, press conference moderator and translator. In the fully packed hall, the players and officials were answering the questions from numerous media representatives. The biggest interest was shown for Czech star player Grandmaster David Navara, who is widely known in chess world as one of the most kind and polite people on tour, always happy to answer and interact with fans and media.

"Czech Republic has a great chess culture, and I hope this tournament becomes a tradition. I am really excited to play such a strong event, after a very long time. I hope to do well, and if I am in good shape, I will be happy", Grandmaster Harikrishna said to the press.

Grandmaster Boris Gelfand is always a dear guest here in Prague. He played a match against Czech #2 Viktor Laznicka in 2018, as part of the Novoborska Sachova Corrida. "I am happy to be back to this beautiful city, and I am looking forward to playing in this event", said Grandmaster Gelfand.

The reigning Women's World Champion Ju Wenjun is glad she was invited to Prague Chess Festival, and knowing how strong the line-up of the Challengers is, she hopes to finish in plus and play some good chess.

The opening ceremony is scheduled for 6.00 pm today, in Hotel Don Giovanni, and the first round starts on March 6, at 3.00 pm.